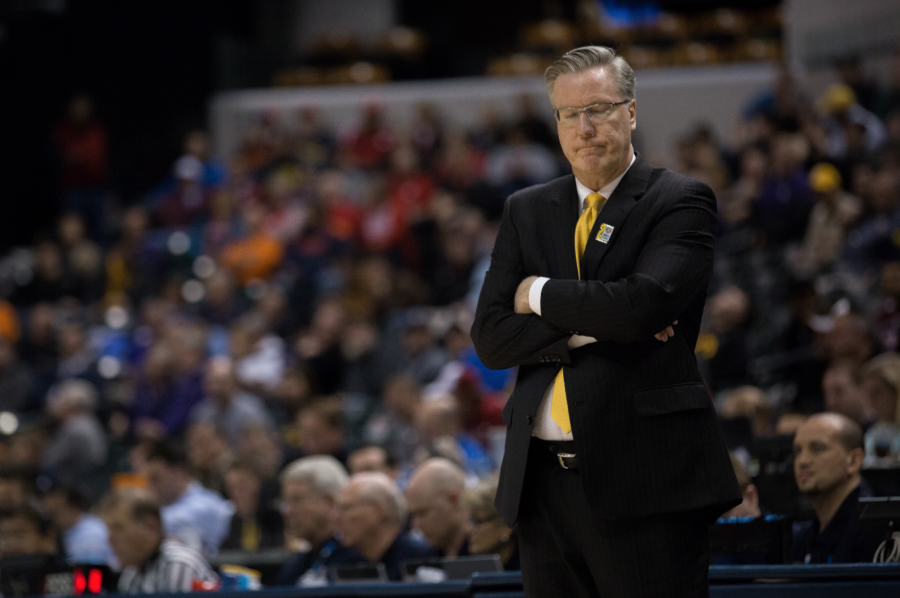 INDIANAPOLIS — The Hawkeye basketball team lost to Illinois on Thursday afternoon, making three-consecutive seasons in which Iowa has been ousted in its first game of the Big Ten Tournament.

The Hawkeyes struggled from the outset, shooting just 2-of-7 in the first four minutes of the game and 0-of-3 from beyond the arc with 2 turnovers. Iowa quickly trailed 11-4, and it didn’t get much better from there. At least, not for a while.

“We didn’t get off to a good start,” head coach Fran McCaffery said. “I don’t think in a tournament situation that’s a good thing … our offense didn’t really flow very well in the first half; it was pretty much just Pete and Jarrod making shots.”

Jarrod Uthoff did his best to carry his team through the difficult times, at one point bringing the Hawkeyes within 2 at 13-11. Uthoff was 4-of-4 with a 3-pointer for 9 points, while the rest of the team went 1-of-9 and 0-of-3 for 2 points.

The Illini launched an 8-0 run after a time-out, however, and just as it began to seem like Uthoff wouldn’t be able to do it on his own, help arrived. And it arrived in a flurry.

Mike Gesell nailed a 3-pointer just ahead of the six-minute mark to reduce Illinois’ lead to 24-18. After an Illini time-out, Peter Jok broke out of a slow start to knock down three-consecutive 3s in 68 seconds en route to a personal 15-4 run to create an entirely new game.

“I just started off slow, sloppy, so Coach took me out,” Jok said. “I don’t plan on it, but once he starts yelling at me and telling me I need to pick it up, I have no choice but to pick it up.”

Jok continued his torching of the Illini defense in the second half, scoring 10 more points in the first five minutes on 4-of-5 from the floor. The only problem was that the Illinois offense was doing just as well.

After going 3-of-6 from distance in the first half, the Illini let it fly and went 6-of-10 in the first 10 minutes of the second half. Kendrick Nunn hit a deep 3 near the 11-minute mark to extend Illinois’ lead, 61-50.

If the Illini came back to Earth from that point on, then Iowa went absolutely stale. The Hawks scored just 5 points over the next seven minutes, but Illinois didn’t use that time to pull away. Instead, a 3 by freshman Jalen Coleman-Lands with 3:33 remaining put Illinois up only 11, but that triggered an 11-0 run by the Hawkeyes to tie the game at 66 with 1:40 to go.

However, a handful of tipped balls and errant passes prevented the Hawkeyes from scoring in the final minute, and the Illini held on to win, 68-66.

Jok (29) and Uthoff (21) combined for 50 points between the two of them, but with roughly three minutes remaining, the Hawkeyes had gotten only 8 points from the rest of the team. On the night, players not named Uthoff shot 6-of-30 from the floor.

In what could be a small representation of the season as a whole, the Hawkeyes had chances to win late, but fumbled the game away at every opportunity.