3 not the magic number for Hawks 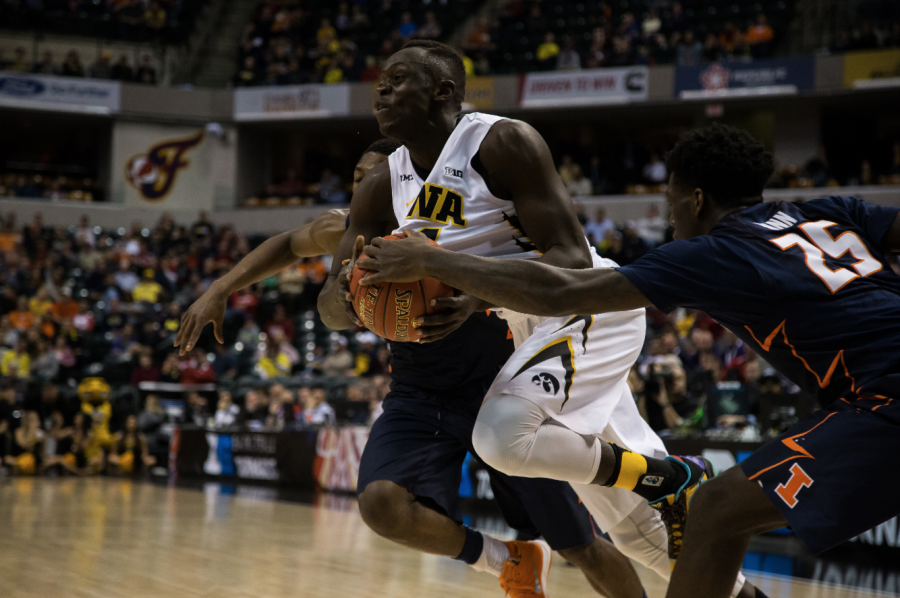 INDIANAPOLIS — The Hawkeyes fell to the Illini in their first game of the Big Ten Tournament on Thursday, and while fans could’ve anticipated an offensive shootout, most probably didn’t expect Illinois to beat Iowa at its own game.

Iowa has been one of the Big Ten’s best shooting teams from outside all season long, posting a collective 38 percent from 3 and boasting several players above or near 40 percent. Once upon a time, many moons ago, the Hawkeyes combined to shoot 40 percent collectively. Iowa has seen a bit of a departure from its midseason form, however, which brings us to the 68-66 upset in Indianapolis.

Iowa has found a new home in the past month or so, hovering closer to 30 or 35 percent from beyond the arc in its past eight games including Thursday. Iowa actually shot 40 percent from 3 against the Illini, but that figure is something of a red herring.

Peter Jok and Jarrod Uthoff combined for 50 of Iowa’s 66 points and six of eight 3s. They drastically inflated an otherwise dreadful performance by the Iowa offense.

Iowa players not named Jok or Uthoff shot 6-of-30 from the floor and 2-of-9 from beyond the arc.

Nonetheless, even if it was concentrated to two players of output, the Hawkeyes did get some production from the outside. It didn’t, however, matter.

“They shot it better today,” Iowa head coach Fran McCaffery said. “We shot it better [at Illinois on Feb. 7]. I don’t think you could ever say anything other than this team keeps coming.”

Illinois finished the season sitting perfectly in the middle of the pack in terms of 3-point shooting, but everything gets tossed out the window come March. As we all know, the hot teams go far.

As it turns out, the Illini just so happened to be coming off a 33-point drumming of Minnesota on Wednesday, the largest margin of victory in Big Ten Tournament history, in which they shot 14-of-26 from distance (54 percent). They had the hot hand, as they say, and it was too hot for the Hawkeyes to handle.

Illinois made 3-of-6 3s in the first half before opening with a barrage of 3s in the second half. Peter Jok scored 25 points in a span of 10 and a half minutes that was ultimately negated by a 4-of-5 start from the Illini, and though they cooled to a 7-of-17 mark on the half as a whole, they were always there to make one when they needed it.

Iowa’s offense (Jok and Uthoff) was more than capable for significant stretches, but it was the lack of ability to slow the Illini that played the biggest part in the upset.

“I think what it comes down to us not playing good defense,” Uthoff said. “You saw it, we were down 8 and cut it to even in a matter of minutes. That was all fueled by defense.”

Unfortunately for the Hawkeyes, they only had one real solid stretch of defense, and it was too little, too late.

Despite all the struggles the Hawkeyes have had in recent weeks, they’ve still mostly been in close games. A consistent inability to win close games is another topic for discussion, but the best solution would be to avoid that situation all together. In fact, the most alarming aspect of Iowa’s collapse has been the drastic falloff on the defensive end.

“I don’t think it was the offense, we’re just not defending like we did in the beginning of the season,” Jok said. “We were scoring, they were scoring, we couldn’t get any stops.”