Studer: Anyone but Trump 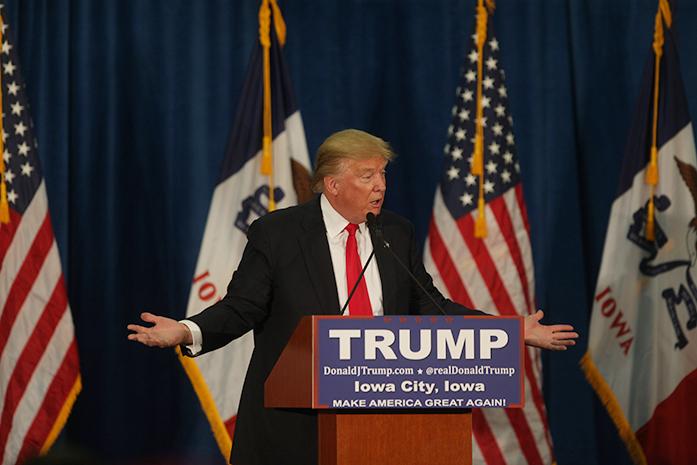 FILE - In this file photo, Donald Trump speaks to a crowd at the University of Iowa Field house on Tuesday Jan 26, 2016. (The Daily Iowan/Jordan Gale, file)

There is nothing more terrifying than the idea that Donald Trump will become our president. Trump has continued to win a majority of primary contests, making it likely that the former television host will win the Republican nomination.

Most of this fearful talk is because of his domestic policy. Will he be able to achieve all that he talks about doing in office, such as deporting every illegal immigrant? Even media outlets from different countries have expressed their views. Der Spiegel, the German magazine, has called Trump the most dangerous man in the world. Some conservatives in the Republican Party leadership have even vowed not to support Trump.

He is clueless when it comes to international affairs. He constantly tries to make sure the public is comfortable with his ideas, but his plans would make us worse than before. About a year ago, Trump stated that he would have ISIS destroy Syria’s government. It’s an outlandish claim because ISIS is murdering and hurting thousands of innocent people. How would it be more beneficial to the region? Another aspect of his policy that has been brought up is that Trump might start another war. He has called for more troops. Trump has also mentioned that he wants to bomb North Korean nuclear sites.

Trump is also a risk to the U.S. reputation. Our previous presidents have made sure to be clear that the United States is not at war with Muslims. Yet Trump wants nothing to do with Muslims. Trump has made global headlines for claims that he has made in his race for president, like putting a temporary ban on Muslims, that has embarrassed us around the globe.

He is also extremely unpredictable and changes his views. According to the New York Times, Mitt Romney noted, “This is the very brand of anger that has led other nations into the abyss.” Listening to Trump on Super Tuesday, he constantly cut off reporters who were asking fair questions.

How can we let someone who is not taken serious on a global level be our next president? Before Americans vote in this election, they need to take a second and understand the damage Trump would do as president. We cannot take the risk of Trump as president.

We need someone who had her or his head on straight and can help lead to positive change. We cannot be at war with other nations. Given his history, it seems likely Trump will abuse his position as president for personal gain. We must focus on changing America for the better.

Americans might be sick of traditional politicians, but that is not a reason to elect Trump. We need to find a solution rather than electing the most unpredictable person in America. How as Americans are we letting this happen? I agree that something needs to change in American politics, but it should not be Trump.

According to the Times, Peter Feaver, a Duke University political scientist said, “What Trump promises to do would in some important way make all the problems we face dramatically worse. Why, at a moment when the country desperately need our A-team, would we send in the clowns?”

We must change America with anyone but Trump.