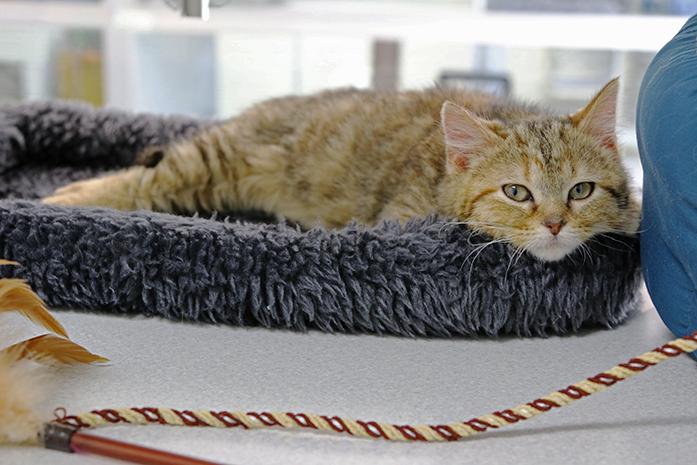 A kitten relaxes in its bed at the Iowa City Animal Care and Adoption Center on Tuesday, March 8, 2016. The center has a new program on Thursday nights that allows kids to read to the cats for volunteering experience and gives the cats a chance to socialize with people. (The Daily Iowan/Tawny Schmit)

A new program has kids reading aloud and cats overcoming their fears.

The Iowa City Animal Care and Adoption Center started a new program in March called “Read to The Paw,” in which kids read to cats at the center.

Iowa City communications coordinator Shannon McMahon said the goal of the program is to help children learn to make a difference in the lives of homeless animals.

“We didn’t think of it,” she said. “Each month we get a newsletter. This program was in it, and we thought we could make it work, and so we tried it.”

Ford said the initiative has gone very well so far, and people seem to like the program.

“Every Thursday, there are four half-hour slots, and two children can come every time,” she said. “The rest of March is full, and we’re already booking into April.”

Ford said the kids get practice reading aloud in an environment with no pressure.

“Reading aloud is something children are expected to do and be good at,” she said. “Reading to cats is different from reading to other kids in class or to your teacher. It gives them a chance to relax and read in a nonjudgmental environmental.”

Kids are not the only ones who benefit from the program, Ford said —the cats enjoy it as well.

“Some cats in the shelter are fearful of people. They don’t even want to come out of their hiding boxes for the volunteers,” she said. “When you put a child and just have them read, the cats are more likely to come out on their own and are more likely to do it again because they came out by choice, instead of reaching in and pulling them out.”

Kids are not allowed to reach and pull the cats out of their kennels, Ford said; instead, they’re only able to read to the cats and pet them if they come out.

Ford said a child’s voice is more comforting to a cat than an adult’s.

“Child voices are softer and lighter, so some of the shy cats are actually liking the reading program as well,” she said.

Angela Pilkington, the children’s services coordinator at the Iowa City Public Library, said she thinks the “Read To The Paw” program is absolutely fabulous.