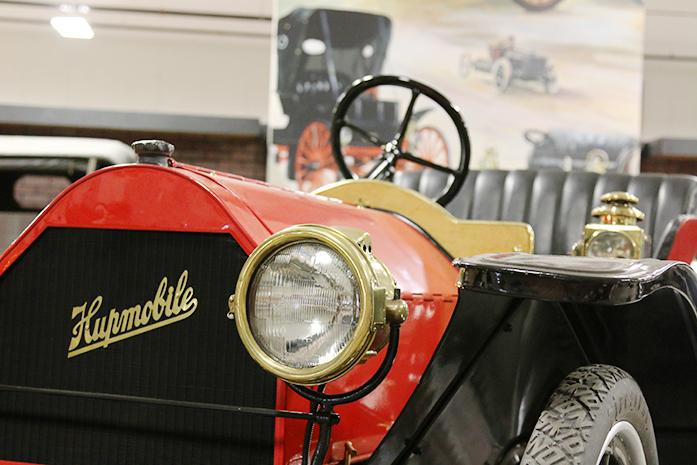 A 1910 Hupmobile is shown at the Antique Car Museum of Iowa on Tuesday, March 8, 2016. There is a bill being considered that would make front license plates on cars optional. (The Daily Iowan/Tawny Schmit)

Front license plates may become a thing of the past for some car owners in Iowa.

A bill that has passed the Iowa House of Representatives Transportation Committee, would not require a front license plate on vintage vehicles that are at least 25 years old and sports cars. The bill defines sports car as a vehicle with two seats with a front bumper 8 inches or fewer off the ground and capable of exceeding 130 mph.

Rep. Josh Byrnes, R-Osage, the head of the Transportation Committee, said he believes the idea would bring relief to vintage-car enthusiasts, citing problems travelers have had in the past.

“I’ve had a lot of car enthusiasts and organizations contact me because there’s a major car show in St. Paul that they’re traveling to, and they get pulled over for not having a front plate,” Byrnes said. “We get thousands of vehicles traveling through, and they’re getting pulled over. It makes Iowa look like a bad place.”

Bruce Anderson, the president of the Iowa Automobile Dealers Association board, said even though the issue of front license plates wasn’t on the board’s agenda, the association supports the bill.

“The dealers have gotten behind it because new cars are not designed to carry a front plate,” Anderson said. “That front bracket is an add-on, an afterthought.”

Curt Eilers, the owner of Classic Enterprises in Cedar Rapids, said dealers in Iowa are only required to put a license plate on the rear of a car.

“More that 90 percent of the cars we sell go out of state; we never know when we sell it if they’re going to have to put on a front plate,” he said.

“Most new vehicles don’t come with a front license-plate bracket,” he said. “It’s an extra cost to the consumers.”

The bill has raised concerns by law-enforcement officials, who argue removing the front plate would make their job more difficult.

“If the alert is only put out as a ‘gray sedan,’ can you imagine how many gray sedans are being called in?” Pulkrabek said. “If people are paying attention to plates, they can call it in more effectively.”

The lack of a front plate would also make it harder to catch car thieves; stolen cars often only have a back plate stolen from another vehicle.

“Frankly, this representative [Byrnes] has never worked nights on law enforcement,” Pulkrabek said. “He has no idea what it’s like to try to find a vehicle. He’s looking out for the wealthy. They’re affluent and can afford to pay that ticket.”

Anderson said he believes lack of a front license plate shouldn’t be a primary offense.

“They shouldn’t be pulled over just because they don’t have a front plate,” he said. “It seems there would be better use of law-enforcement resources.”