Dan Tedesco: Back to solo basics 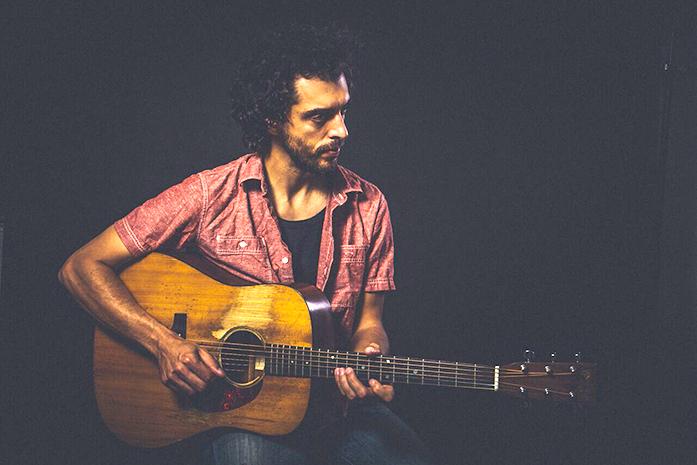 Dan Tedesco, singer/songwriter/guitarist, is in the midst of a four-month residency at Blue Moose.

Being alone can be a daunting prospect; there are no nets to catch you, no shoulders to share the burden, and no second judgments from anyone but yourself.

But while performing alone, Dan Tedesco is at his most comfortable.

Tedesco and his acoustic guitar took the stage at the Blue Moose, 211 Iowa Ave., Tuesday night as part of a four-month residency.

The solo artist entrenched himself in music at a young age. His parents had a collection of “songwriter music,” including albums from the Beatles, the Beach Boys, and Bob Dylan.

“[Those bands] opened me up to songwriting and putting words to music,” Tedesco said. “I’ve always had a creative writing side, and [songwriting] is how I express the things I have to say.”

At first, Tedesco’s ventures into musical creation and performance consisted of just himself and a guitar. But from 2008 through 2011, he played with a band.

As time went on, the band began to bleed, losing band member after band member. But rather than replace them, Tedesco stretched himself to work without them.

“Anytime you play music with a group, everyone’s carrying part of the weight,” he said. “As you start taking people away, it gets heavier for the people remaining. But through that experience, you learn what you need and what you don’t.”

His journey from solo to group performance and back again has given him the experience that helped him discover that in performing alone, he feels “most honest.”

“Switching to solo challenged me to write really good songs,” he said. “Being in a band can help make up for shortcomings of the lyrics of a song; when you’re alone and you strip it down, you spend a great amount of time making sure each individual song is what it needs to be.”

As he spent time trimming his songs of superfluous components, distilling the necessities, he began to explore audio recording and engineering. This exploration went so far that his most recent album — self-titled Dan Tedesco — was led by him.

The disc consists of only vocal and guitar from Tedesco, who also produced and handled the sound engineering for the album.

“I’d been making demos at home, and it occurred to me I liked the sound [of those demos],” Tedesco said. “A low-fi approach almost became a character in the music; it added a depth and presence in the overall music.”

Having found comfort in his more minimalistic approach, Tedesco hopes the honesty and heart he puts into his music will be noticed by audiences.

“With anything in arts, you hope what you make challenges people, just like a good conversation,” he said. “You give a piece of yourself to them, and, in the best cases, they learn something about themselves in return.”