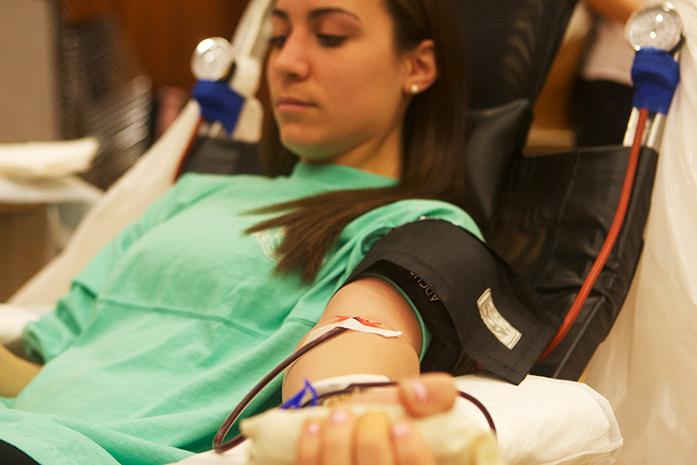 UI sophomore Nikki Gierman donates blood for the Greek Week blood drive at the IMU on Monday, April 7, 2014. Greek Week is a series of events that celebrate the Greek community. (The Daily Iowan/Valerie Burke)

The University of Iowa community is still feeling the aftereffect of the mump on campus — it’s creating a shortage of blood donations.

According to UI blood-drive officials, donations are down 20 percent from the last academic year as a result of eligibility decline because of mumps vaccines and a new computer system being implemented.

Kerry DuBay, a recruitment coordinator for the DeGowin Blood Center, said difficulties with a new computer system and the fact those who received a mumps vaccine cannot give blood for 28 days have affected the amount of blood donated this year.

More than 100 students caught the mumps at the UI this past fall, and the disease affected students heavily across the Midwest in schools such as the University of Illinois-Urbana/Champaign. The MMR vaccine is used to combat the condition.

And it has left officials with a shortage.

“I know some people get a little nervous, but it’s a very short donation, and it’s very important,” DuBay said. “There are a number of patients who rely on blood donations for their treatment.”

The DeGowin Center collects blood in residence halls, as well as in various UI buildings and towns close to campus she said.

DuBay said the DeGowin blood drives are a local initiative that provide blood to UIHC and other patients in the Iowa City area.

RELATED: Blood drives have been saw increased success at the UI in 2014

“We really celebrate the idea of live here, give here,” she said. “When you donate with us, you know you’re helping someone in Iowa City who needs blood.”

DuBay also said the blood-drive group began hosting drives at residence halls in 2009 and has continued the trend since with improved donations from students.

Amy Hoehne, a UI medical student who works at the blood center, said platelets are in such demand that employees may donate their blood during shifts when time allows.

“Since I have the time and I’m willing to sit somewhere for two hours at a time, I’m fine with doing platelets,” she said. “For me, it’s worth it because there are not a lot of platelet donors.”

Platelets are a donation that allows blood to be separated into different components, she said, including plasma and red blood cells. People can donate platelets more often than donating all of the components, but it takes a much longer amount of time, she said.