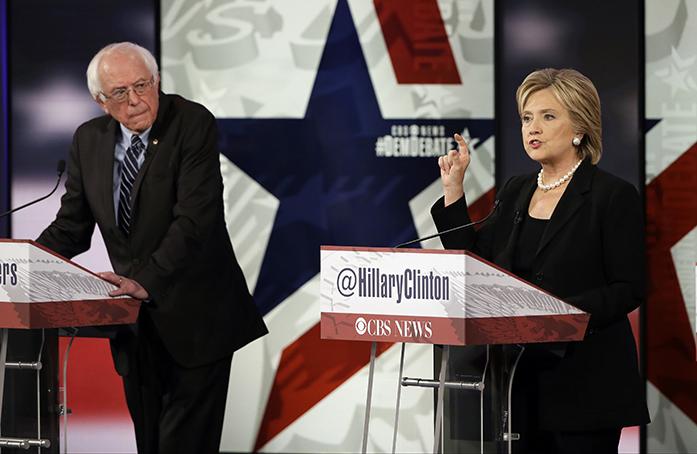 In this Nov. 14, 2015, photo, Hillary Rodham Clinton, right, makes a point as Bernie Sanders listens during a Democratic presidential primary debate in Des Moines, Iowa. Clinton and Sanders are outlining the steps on Nov. 19, they would take to combat the Islamic State group, each making major speeches less than a week after the deadly attacks in Paris. (AP Photo/Charlie Neibergall)

Samuel Studer
[email protected]
Over the weekend, Hillary Clinton produced a dominating win over Bernie Sanders in South Carolina’s Democratic primary, one of her biggest accomplishments of the race. This year, she was ahead by 56 percentage points when all the votes were counted. Eight years ago, she lost South Carolina to Barack Obama by 27 points.

Sen. Bernie Sanders had started to focus on Super Tuesday before the he knew of his defeat in South Carolina. Clinton was positive going into the Feb. 27 primary, and she had started campaigning in Alabama. The next two weeks will be a critical stretch for Clinton, because she can make it impossible for Sanders to win the nomination. Clinton’s campaign has the momentum to keep going.

The good news kept coming in for Clinton on the exit polls in South Carolina: 72 percent of Democratic voters wanted to continue President Obama’s policies. Clinton’s campaign hopes that by today, while they might not have knocked the Vermont senator out, she will have a 100-delegate lead over him. Sanders will need to ask himself if he is serious about his quest for nomination or just fall out of the race entirely.

She has also started to attack Republican Donald Trump. In Clinton’s speech in Columbia, South Carolina, she said, “Despite what you hear, we don’t need to make America great again. America never stopped being great.”

Over the next few days, Sanders will target Colorado, Massachusetts, and Oklahoma, whereas Clinton will target Arkansas, Virginia, and Massachusetts. Many think that Sanders can win in the states that he is targeting; the problem is that leaves six states that seem to favor Clinton. Sanders does not have an easy journey ahead of him, and he will need to survive five more state nominating contests on March 15.

Currently, Sanders has only been able to reach out to a younger generation of voters. According to CBS, Sanders won white voters under 45 by a margin of 69 percent to 31 percent in South Carolina. Today will set the tone on if Sanders will be a winner or loser. Voters will likely stop voting for him if the general consensus is that Sanders will lose.

He has created a universal message, but he evidently cannot win the minority vote. Clinton has reached out to African Americans, she has been able to meet with black leaders, visit black churches, and embraced issues that matter to black voters. If Sanders can only win Vermont and Massachusetts, the race for the nomination will be over. Clinton has won many age groups and genders. She has more advantages over Sanders, and this win has placed her in a good standing for Super Tuesday.

Clinton has the momentum to win the nomination. Sanders will put up a good fight, but he will not be able to compete because he cannot reach out to minorities, something that Clinton has been able to do well. Her win in South Carolina has taken her campaign to a new level.