My country tis of white supremacy 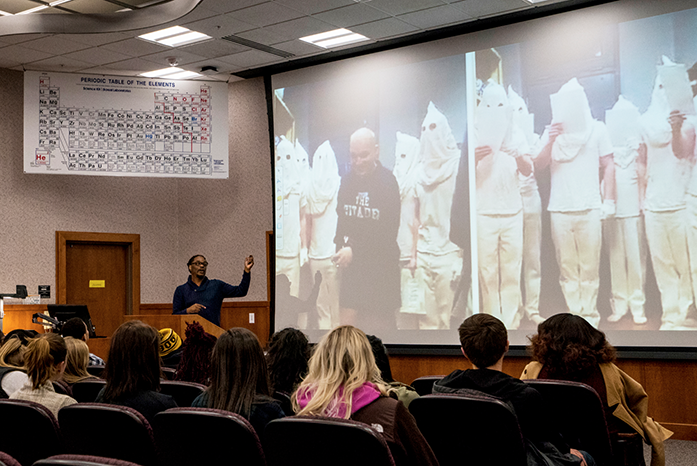 America was built on the foundation of white supremacy.

At least that’s what one advocate for racial equality on college campuses thinks.

Lawrence Ross, the author of the new book Blackballed: The Black and White Politics of Race on America’s Campuses, gave a lecture on racism in Phillips Hall on Feb. 26.

He began his lecture by singing the song that made national headlines after the University of Oklahoma chapter of Sigma Alpha Epsilon sang it. The song makes references to lynching and discriminatory policies.

Ross said incidents like the song are a part of systemic racism on college campuses.

“One topic America never likes to talk about is racism,” he said. “Nobody wants to talk about it honestly and bluntly, because people will get all up in their feelings.”

University of Iowa freshman Jamie Stubbs said she wanted to hear the lecture to learn more about the hardships minorities face on campus. She said it is important for the UI to host lectures with intellectuals such as Ross because it educates the Iowa City community.

“It’s important because people are so close-minded, and I want to be positive about the situation,” she said. “I haven’t had any racist encounters happen to me, but it’s important to have someone here talking about it.”

UI sophomore Nicole Villarreal said she came to the lecture as a part of an educational requirement for her sorority, Alpha Delta Pi.

“I chose to come to this lecture because it’s a good topic to talk about, and it hits home because of last year with the controversy in Mizzou,” she said.

Ross decided to write his new book after spending around 16 years lecturing about greek life and students of color on college campuses after his first book, *The Divine Nine: The History of African American Fraternities and Sororities*, was published.

“Students of color would talk to me about their experience on campus, and almost always they had the same stories,” he said. “They didn’t feel a part of the campus, they had no voice, no family, and felt they were carrying a burden of being a person of color on campus.”

Ross said white people are considered the default normal and society bends toward them instead of minorities. He believes this is where racism stems from.

“Racism claims to find racial difference in character and intelligence, inserts superiority, and tries to maintain dominance through a system of beliefs, behaviors, and use of language and policy,” he said.

Ross called racism a “societal cancer” and told the audience the best way to stop racism is for people to stand up against it when they see it.

“We should all work to be able to say, ‘When I graduate from the University of Iowa, I will have helped make sure everyone has the best experience possible,’” he said.