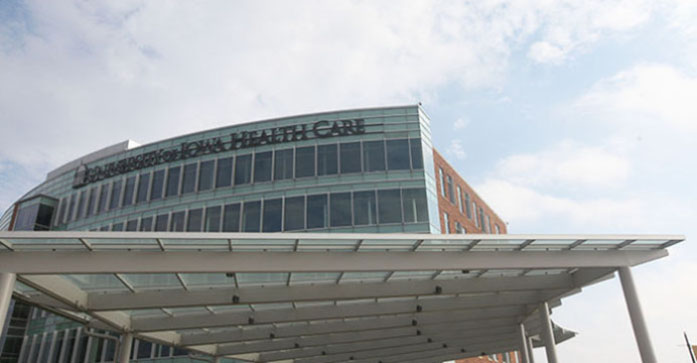 FILE - The University of Iowa Health Care building is seen on Wednesday, Oct. 1, 2016. (The Daily Iowan/file)

New changes are coming to the medical field’s leadership on campus.

In their meeting on Thursday, the state Board of Regents approved the merging of leadership at the University of Iowa Hospitals and Clinics and the UI College of Medicine.

“After multiple discussion with the provosts and other people in the organization — and with President [Bruce] Harreld — we decided to bring the position of dean and the VP together to achieve even a stronger integration than we have in the past,” Robillard said.

The UIHC has also seen a sharp increase in visits since last year, with 500 more cases, making for an especially strong fiscal season.

“Just well done,” Regent Mary Andringa said. “This continues to say what a phenomenal gem the UIHC is.”

Banking on the success, UIHC have begun hiring pediatrics workers in preparation for the children’s hospital, which will be completed in the summer.

Regents President Bruce Rastetter recalled an idea expressed earlier by Robillard about changing the medical school requirement from four to three years at the UI, which Rastetter encouraged Robillard to pursue.

Rastetter said it would “streamline” the education and the extensive years needed to graduate for medical purposes. UIHC officials added that it takes about 14 years to get through all of medical school.

The program is scarcely available in the U.S., and resides in 62 cities, most of which are academic institutions.

Despite the program’s success in an eighty percent survival rate after surgery, they said half the patients die after six months.

“We want to change these numbers,” Klesney-Tait said.

Parekh elaborated that the UI is exploring stem cell research to make the lungs more adaptable to the recipient.

“We have not made much progress in this field because we can’t replicate the human disease,” he said. “[Stem cells] are what the future is.”

The two offered pictures of survivors, to which the regents smiled.

“[Survivors] flooded us with photographs with us to share. They wanted to show what it means to them,” Klesney-Tait said. “When you get a transplant, you get a free t-shirt,” she said, lightening the mood.

The two expressed hope for the future in the program in saving more lives.

Joe Clamon, the associate vice president for Legal Affairs at UIHC, advocated for more leadership roles. He said risk management is a necessity for employees and the hospital to demonstrate, but it has been burdened with work load since it began in 1973.