Iowa City City Council to decide on ‘The Lens’ fundraising 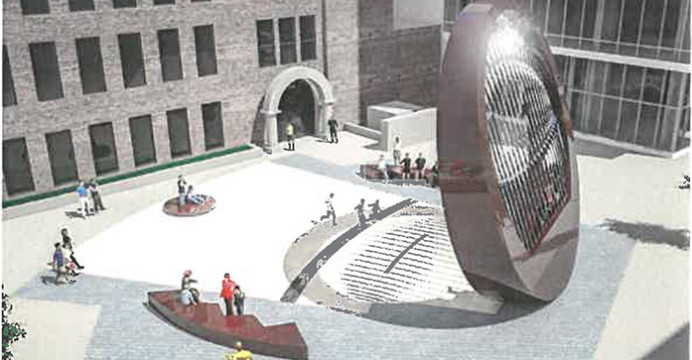 An ongoing debate on a potential public-art project will continue next week.

The Iowa City City Council will decide on March 1 whether to provide $50,000 for The Lens art project fundraising.

The structure is planned to be constructed on the Pedestrian Mall, and it will cost $500,000, with other funds coming from the private sector.

At the council’s Feb. 2 meeting, the vote to fund the project was stymied at 3-3. Councilors John Thomas, Rockne Cole, and Pauline Taylor voted against the proposal. Councilor Terry Dickens was not able to attend the meeting.

“They would start their fundraising afterwards,” he said. “I presume they would start in March, and it would hopefully be complete by the fall in order to make sure the art can be constructed in time for an installation in 2017.”

Fruin said if the council does not provide $50,000, the project could still move forward but with some challenges.

“The project would need more fundraising,” he said. “It would be more challenging.”

He said the council would also provide art direction if it does provide funding.

“If it doesn’t work out, we would have to think about an alternative design for that space,” Fruin said. “But we haven’t had to cross that bridge yet.”

“Our primary objective as a council is to protect the taxpayers,” he said. “I have a lot of confidence in the project’s ability to privately fundraise. So at this time, I am not supportive of the $50,000 request.”

Cole said that though he does not support the request, it does not reflect his or the council’s view of public arts in Iowa City.

“This is not about our community’s support of public art,” he said. “I’m supportive of art, but this is about this particular piece, and it does not justify the use of public funds.”

The funding request was not flagged when the project was introduced, and Cole said it should have been for it to be considered.

“$50,000 is a lot of money, and this isn’t a good process,” he said. “Anytime we request funds from the taxpayer, it should be done at the early stage.”

RELATED: The Lens to center downtown

“I have had people stopping me on the street and wherever I go, telling me to vote for this project,” he said.

Mayor Jim Throgmorton said he has also received many comments about the piece, both positive and negative.

“I expect to receive many more comments in the coming week,” he said. “I’ll decide how to vote after considering the public’s diverse views.”

Marcia Bollinger, the neighborhood-outreach and public-art coordinator, said it can get difficult to organize large numbers of events to raise money.

“It would be more than dozens of donations, and each person or business would need to be approached independently and separately,” she said.

Bollinger said the Downtown District wants to create some small donation programs online, and it will take time and coordination to do so.

She said when it comes to art, everyone is going to have an opinion.

“People are going to have a wide variety of opinions about any artwork piece,” she said. “All you can do is select the best artist for the job.”

Cole said that even though he is against the council providing funding for the art piece, the decision really lies with the community of Iowa City.