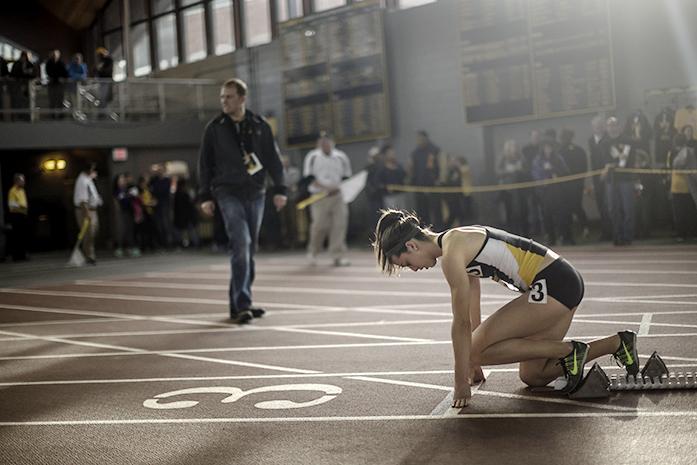 Iowa runner Kaitlyn Nelson is shown on the blocks before the women's 600 meter race at the Border Battle indoor track meet on Saturday, January 10, 2015. The Hawkeyes scored 6 titles Saturday as the women beat both Mizzou and Illinois and the men came in second. (The Daily Iowan/Sergio Flores)

The women’s track distance crew hopes to contribute at the Big Ten Championships.
By Connor Sindberg

While sprinters and jump squad have carried the point load for the Iowa women’s track and field team the majority of this year, the distance crew hopes to add their own points to the team at this weekend’s Big Ten Championships.

An area with potential to add to the team’s point total is in the mid-distance events. In past seasons, the 600 meters and 800 meters have been scoring events for the Hawkeyes.

“A couple really good events for us in the past have been the 600 and 800,” Iowa Director of Track and Field Joey Woody said. One athlete Woody will count on is senior MonTayla Holder. She’s led the team in the 600 all season, and she also ranks eighth all-time in the race at Iowa. Holder is arguably the most versatile athlete on the team. Throughout her time as Hawkeye, the senior has competed in the 400, 600, 800, relays, and 400-meter hurdles.

Holder is not alone; she will be joined by Kaitlyn Nelson and Mahnee Watts. Last time out, Nelson finished 28th and Watts finished 34th at the Feb. 12-13 Iowa State Classic.

The mid-distance crew isn’t the only group seeking to step up this weekend. It will be joined by the long-distance tandem of Madison Waymire and Tess Wilberding.

“The Big Ten is a very tough conference for woman’s distance; it is probably the most competitive in the country,” she said. “Tess and I are ready for the challenge and would love to see the Black and Gold in the top eight in our event this weekend.”

Not only is the competition a challenge, but Waymire has been dealing with some personal complications. She has battled an Achilles tendon injury for the past couple weeks.

“Being injured has definitely not been ideal this indoor season,” Waymire said. “Realistically this weekend, it’s going to make it harder for me, but I’m not going to let it hold me back. I have the same expectation for myself as if I was 100 percent healthy.”

While Waymire didn’t participate in the last meet, Wilberding has taken her performance to another level. The junior finished as the top Hawkeye in the 3,000 at Iowa State Classic, finishing 24th with a personal record time of 9:46.61.

Even with Waymire now healthy and Wilberding performing at her best, distance head coach Layne Anderson recognizes the difficulties of competing in the championship.

“Sometimes, championship events become more tactical, because there are so many competitors, so our runners might get crowded in a pack, Anderson said. “For them, it’s just about being competitive in the Big Ten and setting yourself up going into the outdoor season.”