Way into the darkness: Wendigo playing this weekend 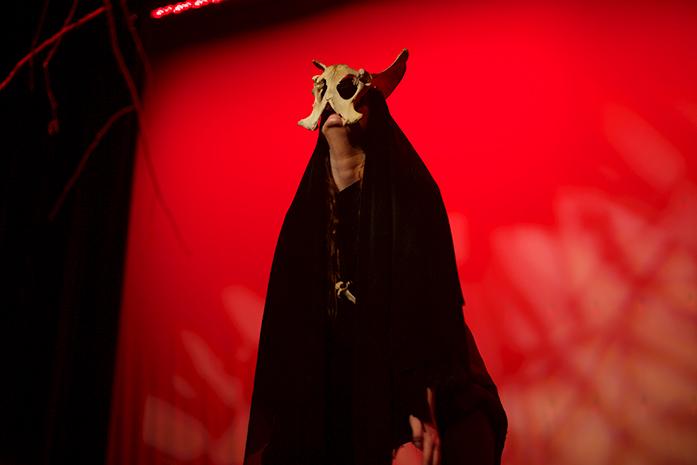 Wendigo, playing in UI Theater B this weekend, covers a seldom-discussed dark side of humanity.
By Devyn Young
[email protected]

Many people visit the theater to forget their own lives for a bit and learn something new. Shows may put a smile on the faces of audience members; Wendigo might do the opposite.

Wendigo, a Workshop Production, will be performed at 8 p.m. Friday and Saturday in Theater Building Theater B. The show follows a single dad and his two children as they take a vacation inBackbone State Park.

Senior playwright Christopher Ray Matheson has been involved with theater for as long as he can remember and got involved in playwriting in high school.

Yannik Encarnação, a sophomore theater major, plays Eric, an experience he describes as a blast from the past.

Matheson has worked on Wendigo since the end of his sophomore year.

“I struggled to bridge the ideas I wanted to talk about, and I was constantly falling into the pitfalls of horror clichés,” he said. “I wanted to induce fear, but I wanted to do it my way, and it wasn’t until last semester that I got some real clarity about where I wanted to go with the play.”

Director Taylor Edelle Stuart believes the show has grown so much from where it started.

“I do this thing where I don’t do anything small, I have to make everything as big and as crazy as it can be,” she said. “We were given by our department a Workshop Production, which was supposed to take place in a small acting studio: a very intimate setting, two nights, $50 for a budget… a very bare bones, if you will, sort of play. Then we got promoted to a larger theater, got costumes, sounds, lights, a crew…people really believe in this script and believe in this play and so many people got on board to make it as big as they could.”

Though the concepts in the play might be touch to digest, Stuart said the show “will take you on a journey through the deepest, darkest parts of the human psyche,” the playwright said everyone can find something in the performance.

“This play harbors a lot of truth we as humans don’t like to talk about, and by watching this play, we can explore those truths through the lives of those character,” Matheson said.

Encarnação enjoys the thrill of the piece.

“If you have a family, if you have ever had a spat with a sibling, if you’ve had a secret that you didn’t want to come out and everything in between, this play has something for you,” he said. “It will literally make you cringe in your sleep … you will not be able to sleep after this show. It takes your mind, and it twists all of your preconceived notions into what’s going on into the worst possible thing … in a beautiful way.”