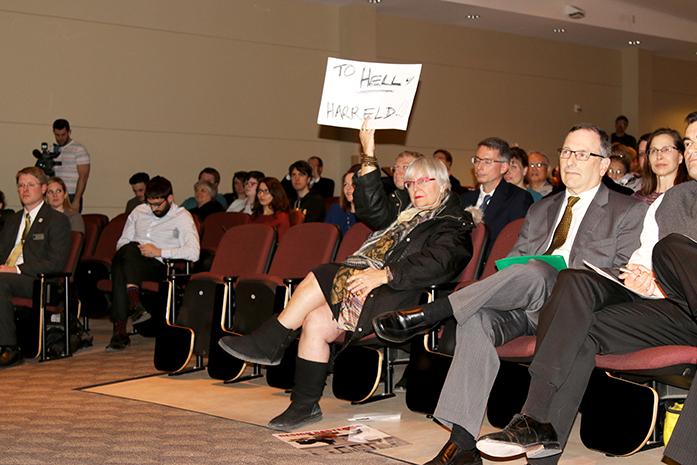 While some in attendance expressed doubt about the meeting’s structure, one hour was allotted to questions from the crowd. Harreld also made a commitment to hold at least three town halls a year, every fall, winter, and spring.

Harreld’s first such meeting was not without its disruptions and terse exchanges. Protesters lined the back of the room, and many directly called for Harreld’s resignation during the Q&A session.

Harreld sits next to protestor. pic.twitter.com/8TTHXaGuXU

The loudest protester, activist Melyssa Jo Kelly, interrupted several presentations and called for Harreld’s resignation. She said she was not there representing anyone but herself.

“If you really want someone to resign, you cannot be polite,” she said.

Will dethrone Harreld as a symbol, like activist removing Confederate flag in South Carolina last summer

“How can we expect anything fruitful to come from such a rotten tree? Harreld is a mere branch on this rotten tree,” he said, indicating a belief the “trail of corruption” led to the governor.

Several protesters complained about the state Board of Regents’ search process that appointed Harreld last year.

“[The regents] process I’m also watching here for the first time, I’ve only been here for 120 days, I must say …” Harreld said. “Well, let’s put it this way; when we designed this forum, we didn’t choose that method to get feedback and have dialogue and discussion, so, yes, I’ll make a point to express my concerns about that.”

In his presentation, Harreld emphasized the UI’s slipping rankings in the Association of American Universities and U.S. News & World Report — a touted part of his presidency.

He also addressed dwindling state appropriations, which he indicated would theoretically hit zero in 2029 based on their trending from 2000-2016. Harreld said there may be a need to reconfigure resource allocation to reach “excellence” but said he would be open to other ideas.
Harreld just displayed my fave graph to help sum up the state of higher ed in Iowa (and the country) pic.twitter.com/gOWVEjrVbL

“I wasn’t talking about cutting; I was talking about prioritizing. There is a difference,” Harreld said. “In economics, is the notion that you actually could, without cutting, take resources and put more of them over other areas than all the areas at the same times. Some areas get more, and some get less. That’s not a cut.”

Lehnertz and Butler shared plans for the 2016-21 UI Strategic Plan, which is ongoing.

Rocklin addressed housing, both for undergraduates and graduates. While the UI will undergo strain to accommodate the approximately 5,700 incoming first-year students next year, operations should return to normal in 2017.

However, graduate-student housing remains a “vexing” issue, Rocklin said. He said Hawkeye Drive might be reaching the end of its life, while Aspire at West has come under fire after accusations of high rents.

UI Housing has historically faced, and continues to face, occupancy issues in light of swelling enrollment (though new dorms are on the way)

“Because I don’t have an answer on campus, then let’s face the reality about where we live,” he said. “We have very low vacancy rates in the Iowa City and Coralville area, which leads to very high rents. That’s something that’s hard for the university to influence.”

Rocklin said he has assembled a team of four graduate students and two faculty members to explore options for graduate-student housing. The team would eventually make policy recommendations.