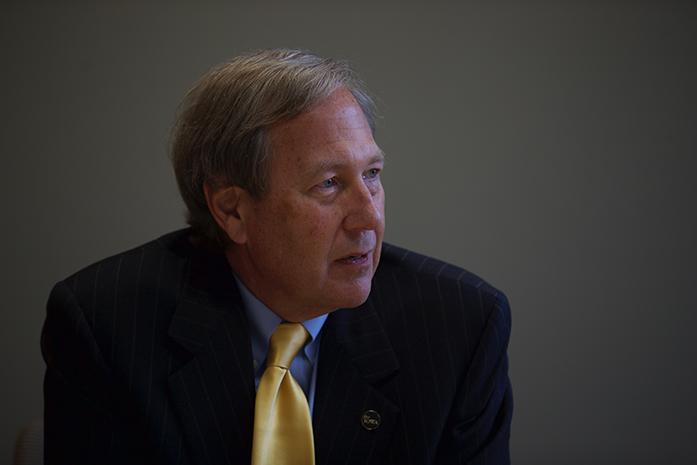 University of Iowa President Bruce Harreld’s first town hall has many drawing their breath in anticipation of questioning the new president.

Matthew Brown, a member of Iowans Defending Our Universities, said he is confident Harreld will honor his promise of holding a public forum in which unscripted questions from individuals will be taken. He hopes there will be some answers regarding changes for the university.

“We’d like to hear some substance regarding his plans for Iowa. He’s been appointed for six months, and there’s been very little substance seeking how he plans on going from great to greater and how he hopes to change the university,” Brown said. “Mr. Harreld has stated for the UI community his belief in accountability, so we are hoping that he will account for his plans and his visions.”

Harreld initially indicated he would have public forums. Defending Our Universities members are worried Harreld will not hold consistent discussions with community members, Brown said.

“Barry, Rod, and Tom — we know them and appreciate their service. However, we are eager to hear from the appointed president,” Brown said. “I’m sure Bruce Harreld will live up to his commitment. It makes sense for him to open with a sentence or a speech, and then we expect 90 minutes of give and take with unscripted questions taken up by Mr. Harreld.”

“We’re hoping that we get to ask Bruce Harreld questions and that he responds to them openly and honestly,” Bryant said. “What we believe will happen — because of the last-minute change to a town hall meeting— we think that he’ll try to filibuster the whole time or pass off questions to his colleagues in administration so he doesn’t have to be accountable.”

Bryant said she believes many COGS members will attend the town hall because there are many concerns they would like to bring attention to, including funding for COGS and graduate-student admissions.

“We would like him to address the trend of decreasing graduate-student admission and cutting grad student and union ties,” Bryant said. “We’re being replaced by undergrad TAs.”

Richard Roberts, a retired UI adjunct associate psychology professor and practicing clinical neuropsychologist, spent $1,000 of his own money to pass out fliers over the past week to encourage community attendance.

He believes the time and place of the town hall meeting is inconvenient.

“Having a meeting from 4 to 6 on a Tuesday isn’t the most considerate idea,” he said. “It’s scheduled during a time when most people are rushing to get home and get their kids to daycare, and it’s in a remote location where there’s not a lot of family-friendly parking.”

Roberts said he doesn’t intend to play nice at the town hall.

“This is war, and it should be fought to be won,” Roberts said.