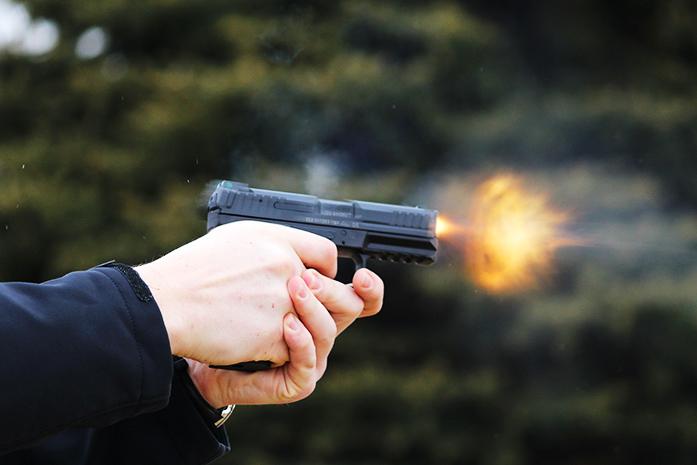 There were 266 more firearm permits issued in 2015 than in 2014 in Johnson County, but whether this means more guns were sold, no one knows.

According to the Johnson County Sheriff’s Office, 1,518 firearm permits were issued in the county in 2015, up from 1,252 permits issued in 2014. This number includes both permits to acquire a firearm lasting one year and permits to carry a concealed weapon, which are good for five years. No permit is required to purchase a rifle or shotgun in Iowa, but an FBI national criminal background check is.

“In 2011, they passed something called a ‘shall-issue’ law, which basically took the decision making for who gets one of these permits out of the local sheriffs’ hands,” he said. “The increase in permits you’re seeing now is because that five-year period is coming to an end, and a lot of people are renewing their permits.”

These permit numbers are not an accurate indication of the number of guns sold because the number of firearms sold in the United States is not recorded, and acquisition of a permit doesn’t mean a firearm was purchased.

Mike Bazinet, public-affairs director for the National Shooting Sports Foundation, said a rough idea of how many firearms are owned legally in the United States can be gathered from a few different sources, even though sales numbers are not recorded.

“If you look at the number of FBI background checks that are required every time someone purchases a firearm, and the ATF Manufacture and Export Report, you can get a pretty good idea of how many firearms are out there legally,” Bazinet said. “We estimate there are roughly 300 million legal guns in the U.S. right now.”

“Based on varying state laws and purchase scenarios, a one-to-one correlation cannot be made between a firearms background check and a firearm sale,” the FBI background-check report states.

Rep. Matt Windschitl, R-Missouri Valley, said the number of Iowans who have received firearms permits since 2010 has gone up consistently.

Windschitl, whose family owns and operates Double Barrel Shooting Supply in Missouri Valley, said firearm-sale numbers aren’t kept because there is no federal requirement to do so.

“We keep that information on record, but we’re not required to report it to anyone,” he said. “We only report to the state when a single buyer attempts to buy multiple handguns in a single period of time.”

Windschitl said he thinks the increase in permits is due to people’s belief in their rights, not a reaction to events in the news.

“Those events can inspire some people, but not most,” he said. “I think people believe in their Second Amendment rights and want to protect those rights.”

Bazinet said interest in firearms has increased steadily nationwide in the last decade.

“People and the media tend to focus on certain events, and there’s some correlation there,” Bazinet said. “But we find most people may get a gun for protection from crime, then get interested in the activity of shooting when they go to the range.”

Rep. Bruce Hunter, D-Des Moines, recently introduced HF 2255 in the Iowa House, which would allow a family member or a law-enforcement officer ask a judge to suspend a person’s ability to posses a firearm if they can prove the person is a danger to themselves.

Hunter said he has seen an increase in gun ownership in the last few years in the state as well.

“I personally believe a lot of it is due to fear in the populace, fear of the unknown, fear of so called ‘terrorists,’ fear of Obama ‘taking away your guns’ because of NRA fearmongering,” Hunter said.

“Americans are buying firearms because they want to protect themselves and their families,” she said. “President Obama has failed to do so.”

Hunter said he sees no problem with people owning firearms but thinks there are some laws that should be looked at.

“No one is going to take away guns from people; that’s just not going to happen,” he said. “But I think with the Republican-controlled House, there have been some bills that have gone too far.”

Laws allowing a loaded weapon on an ATV and removing the requirement that a person be 14 to handle a gun with their parents’ permission were two Hunter said he thought were not wise.

“It just makes no sense to me whatsoever,” he said “The number of guns doesn’t matter, as long as people are lawfully allowed those guns.”