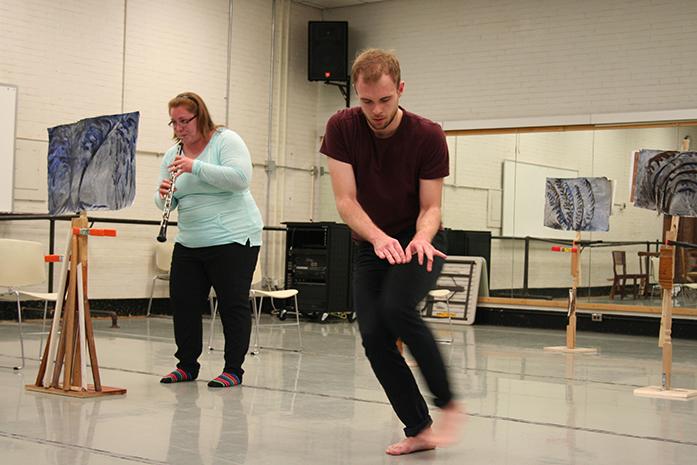 Yet it’s rare to see shows in which the media meet on equal footing.

Enter GRIT, a show inviting dance, music, and visual art to breathe simultaneously on stage. GRIT, born by a group of graduate students, will be produced at 5 p.m. Feb. 21 at the Englert Theater, 221 E. Washington St.

“It’s not a music concert, it’s not a dance concert, it’s not a gallery,” said Dana O’Malley, the collaborator behind the visual-art aspect of the production. “We have visual art on stage, we have dancers on stage, and we have musicians on stage. So there’s an element of interaction for everyone in some way. It’s a thoughtful collision of forces.”

The three graduate students came together after overlapping past projects and began brainstorming a show that would allow each of them to stretch themselves as creators.

“It’s been very eye-opening for me,” O’Malley said. “It’s very much been about remembering the dialogue that we’re trying to have and how we aren’t just pairing media together or just butting heads, but instead how we’re all thinking of the same idea: Grit, and how to show that within the collaboration.”

The provocative “grit” has guided the trio since their early brainstorming sessions. O’Malley, for example, painted directly on raw canvas, giving a sense of roughness to typically precise work.

Marquez described the show as a “near collision.” Appropriate, considering musicians must move into the dancers’ space and dancers flutter “just on the edge of the musicians’ space.”

This shared space creates an inherit tension that extends to the visual-art aspect as well.

“Josh and I collaboratively assembled chairs the ensemble sits in,” O’Malley said. “We collaboratively added materials ,scraps of wood, additional legs, recycled materials to the ensemble chairs, creating a sense of both awkwardness and support. We had to take into account how each musician must sit and move according to the instrument that they play and how to create a sense of grit.”

O’Malley also had to make considerations while creating musical stands for the show with the dancers in mind. At one point, she realized the stands could fall because of the dancers’ movements.

Marquez had to keep the volume of his music from becoming too quiet to make sure the sound of the dancers was never too distracting.

“I have loved developing my capacity to create as a collective,” Chappell said. “I truly believe that inviting numerous perspectives deepens the work, and making GRIT alongside this amazing group of artists has been quite rewarding.”

GRIT has enabled artists to explore the expanse beyond their respective focuses. Marquez describes the musicians he conducts as “engaged in the dancers’ energy,” both groups feeding off the other.

“In the end, grit isn’t just the obstacle, it’s the need to overcome it, but it’s also the product of that struggle,” Marquez said. “That’s what this piece is about, persevering through something and overcoming it.”