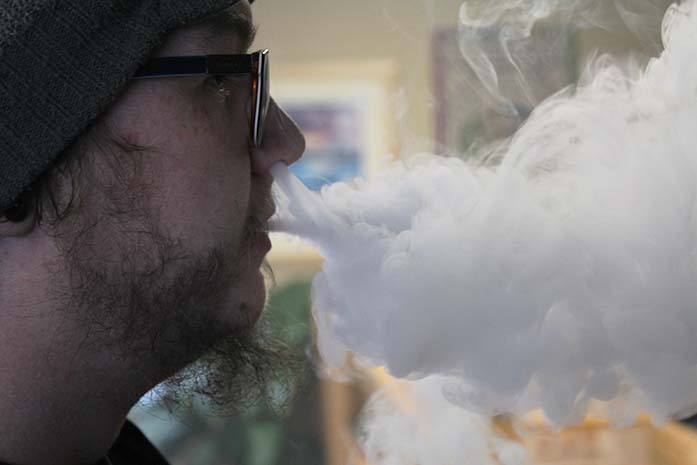 A customer at Black & Gold Vapors blows smoke after using his e-cigarette. Coralville is looking into banning e-cigarettes in places that smoking is banned. (The Daily Iowan/ Alex Kroeze)

An new ordinance is in the works in Coralville to move against “faux” cigarettes.

The Coralville City Council is working on an ordinance to ban the use of electronic cigarettes. The ordinance was brought to the attention of the council in early February.

“Other places in the state are putting these bans in place with the smoking bans,” she said. “It will benefit the respiratory systems of everyone.”

The ordinance will make the use of e-cigarettes illegal in places cigarette smoking is not allowed. This would include public places, city buildings, and places of employment.

E-cigarettes are battery-powered vaporizers that simulate the feeling of smoking but without tobacco.

There are many reasons for an e-cigarette ban, said Jerilyn Oshel, the division director of the Division of Tobacco Use Prevention and Control in the Iowa Department of Public Health.

“E-cigarettes could contribute to adverse effects of nicotine and other risk exposures, as well as being a gateway to other tobacco uses,” she said.

Daniel Boughter, a manager at Quinton’s Bar and Grill in Coralville, said the business doesn’t have a huge problem with e-cigarettes.

“People only occasionally bring them in the bar. It’s not a very popular thing here,” he said. “If it’s not busy, and nobody is bothered by it, we just let the person use it.”

He said that if another patron were bothered by the use of e-cigarettes, employees would just ask the person to step outside to use it.

“Research suggests that preventing access to electronic smoking devices will avoid the normalization of tobacco use,” she said. “It will help preserve clean indoor-air standards.”

Susan Vileta, a health educator with the Johnson County Department of Health said seeing people smoke in public places normalizes the behavior, and a ban would prevent that.

“We know so much more about the effects of tobacco that we didn’t 50 years ago,” she said. “Fifty years from now, we will know a lot more about e-cigarettes.”

Boughter said the ordinance would not affect their business in any drastic way.