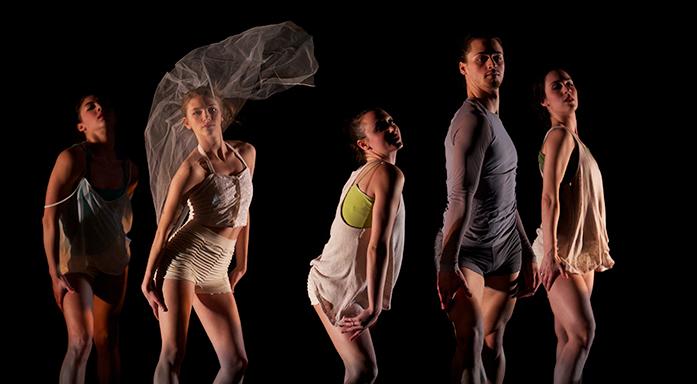 (From left to right) Crystal Gurrola, Anya Kress, Erin Corcoran, Anthony Pucci and Kristen Vasilakos perform "Pineapple" during the Faculty/Graduate Concert rehearsal on Wednesday, Feb. 10, 2016. The performance will be held on Feb. 11th, 12th and 13th at 8pm at Space Place Theater in North Hall. (The Daily Iowan/Valerie Burke)

Dance Department faculty members and graduate students will perform in Space/Place on Friday.

Emotions can be read from the bend of an eyebrow or the soft lifting of a lip. When controlled bounds, mindful movement, and an expert intimacy with the physical self are implemented, anything can be said.

At 8 p.m. Friday, the University of Iowa Dance Department will present the Graduate/Faculty Concert. The event, held in Space/Place, will feature 10 short choreographed performances.

“It’s work from the faculty and grad students experimenting and trying new things,” said Associate Professor Charlotte Adams, one of the choreographers. “There are really different ideas on display. With 10 different works, there’s something new for the audience each time the lights go out and come back up.”

Adams’ piece “Here Comes the Sun,” has its spark from the Arshile Gorky painting “An Artist and His Mother”. Over the course of brainstorming, the relationship in the dance became one shared between two women.

After considering music from the Baroque period, she had original music contributed by Jason Palamara, a previous collaborator. The electronic score allowed her to create a more timeless piece.

“It was really freeing to me to create the movement and then get the music,” Adams said. “In our first collaboration, he’d give me the music, or I’d create some movement, and we’d share back and forth. This time, I had a lot of the movement material made before the composition.”

Graduate-student choreographer Autumn Eckman, who produced two pieces, said the first, “And Sorry I Could Not Travel Both,” is a personal piece loosely inspired by a Robert Frost poem.

“It’s a sort of look back, retracing my own steps as a professional dancer and embarking on this new career path in a new place,” Eckman said.

The poem is also one of the first her father had her memorize. 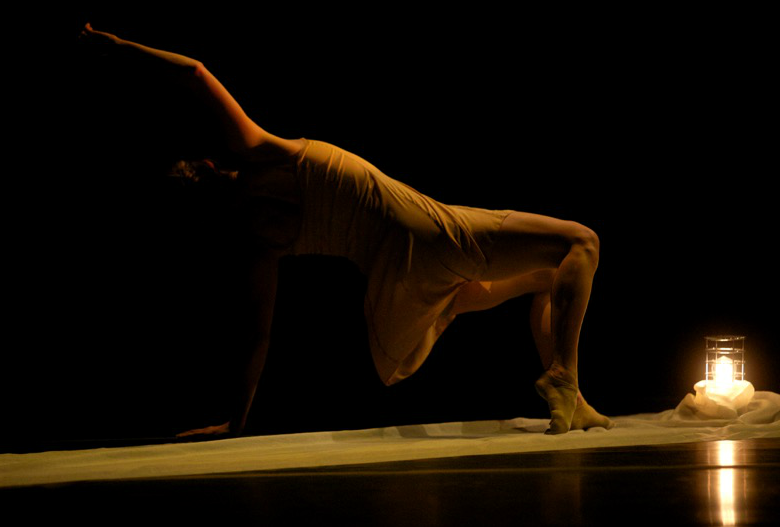 Her second piece, done in collaboration with Ashley Kostelnik, is “Who’s On First?”

“We started looking at relationships, and underlying completion, and jealousy, and things that we do as humans that aren’t so pretty, but we kind of hide them,” Eckman said.

The inspiration for this piece comes in part from the famous Abbott and Costello performance. Though the dance is darker in tone than the comedy bit, Eckman and Kostelink found it useful as a launching point.

“We watched a few of those Abbott and Costello videos for inspiration,” Eckman said. “With their word-association bits. How do you really read anyone’s true feelings anymore? How do I know where I stand with you?”

His pieces “Prêt à acheter” and “Marthagony: The Spectre-acle” are built around the effect of what we wear and the idea of the eternal diva, respectively.

“I wanted to look at [the objects we wear] and their relationships to the body,” Factor said. “I’m interested in how these objects are conduits of meaning and how they hold anxieties for us as a culture. They can constrain the body but also liberate it in certain ways.”

To help express these emotions, the dancers have been outfitted with various garments: shoes that “have the energetic quality of a spider,” a hat that “moves like a jellyfish,” sunglasses that “are like humming birds or bumblebees,” and a handbag resembling a canine.

“Accessories all possess intrinsic power,” Factor said. “Things we choose to adorn our bodies with not only say ‘I like this’ but ‘I’m like this’ in a way.”