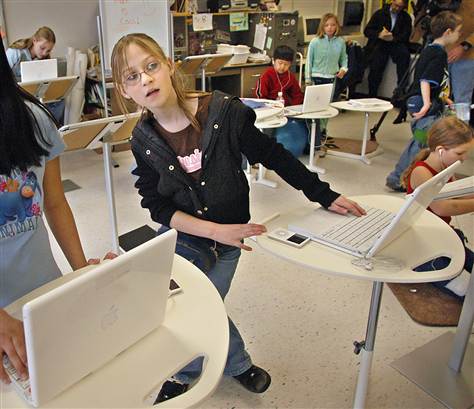 Stephanie Mueller works at a "standing" desk in an experimental classroom at Elton Hills Elementary School in Rochester, Minn. Mayo Clinic obesity researchers want to learn whether classrooms really need desks, or if being able to move around helps students fight obesity and learn at the same time. (Associated Press/Janet Hostetter)

For Ali-Borger Germann, all it took was one article in a National Education Association magazine to completely change the environment in which she taught students at City High.

After Borger-Germann read online that attentiveness increased significantly per student when standing desks were implemented in the classroom, she said she became inspired to make the switch for her students.

The timing to request a set of standing desks came at a perfect time for Borger-Germann. City High was under renovation, so she was allowed to move her traditional desks to a new part of the building and replace them with standing desks.

Standing desks have started to become popular with individual teachers nationwide. Vallencito Elementary School in San Rafael, California, is the first to implement them in an entire school.

Standing desks can help those who struggle or live with some kind of disability such as ADHD, because standing allows them slightly more comfort while they are learning and more ability to focus, said William Coghill-Behrends, the director of the University of Iowa Teaching Learning Center.

“What the research tells us is that it’s good for students to have different options in terms of their physical situation when they are learning; Don’t forget students spend seven hours a day sitting,” Coghill-Behrends said. “Students are on a repeat cycle when they’re in school, so the novelty of a standing-room classroom at City High is something exciting for people, because it’s different than what they’ve been doing.”

Borger-Germann said the shift in the classroom dynamic has been dramatic for students who are used to sitting for such long periods of time. Nevertheless, she said, her students find the new desks exciting and love the fidget bar at the bottom of the desk, which allows them “to get their fidgets out without interrupting class.”

What students may not know about their new seating arrangement is that they were made at the Anamosa State Penitentiary by prisoners. Andrew Gogerty, education sales representative for Iowa Prison Industries, said the standing desks have been a new trend for the industries within the last three or four months.

“There have been a lot of national articles and new stories that have shown benefits not only health-wise but mentally for students when they’re standing,” he said. “That has piqued the interest of teachers and news readers alike.”

While the standing desks may work for Borger-Germann’s students, she doesn’t expect it to be the standard for all classrooms.