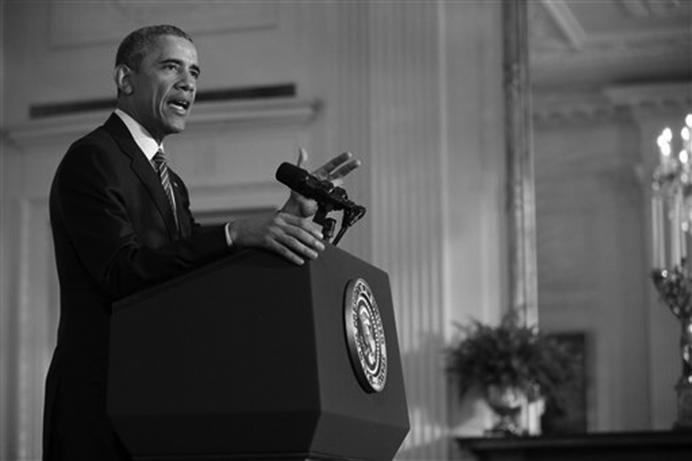 President Barack Obama speaks about his Clean Power Plan, Monday, Aug. 3, 2015, in the East Room at the White House in Washington. The president is mandating even steeper greenhouse gas cuts from U.S. power plants than previously expected, while granting states more time and broader options to comply. (AP Photo/Andrew Harnik)

President Obama made his first trip to a mosque as president on Wednesday in Baltimore in an effort to promote fair treatment of Muslims in this country and reinforce the message that freedom of religion applies to all. By doing so, the president has fulfilled a responsibility that comes with holding the highest office in the land, which appears to be lost on certain political candidates of the GOP variety. When we have candidates for the presidency who bolster their platform with disparaging and discriminatory rhetoric toward Muslims, it becomes all the more important to remind the American people to keep their hearts and minds open.

The president spoke on a litany of issues facing the Muslim community in the context of American society with a central theme of acceptance and tolerance for any and all American citizens regardless of religious affiliation. Among the topics Obama discussed was the way in which Muslims are depicted in a fashion that reinforces stereotypes in the media and how that needs to change. Specifically, he cited a need to “lift up the contributions of the Muslim-American not when there’s a problem but all the time” and followed by saying, “Our television shows should have some Muslim characters who are unrelated to national security.” Implicit in his call for wholehearted inclusion was the important caveat that this inclusion remains unconditional.

Acceptance is not supposed to be a reaction to the current political climate but rather, an intrinsic practice of our society. This is not the first time a U.S president has visited a mosque, and the immediate comparison with the current president’s trip is that to former President Bush’s visit in the days after the 9/11. During Bush’s visit, a similar sentiment was expressed but under far different circumstances. This makes Obama’s visit far more substantial, especially considering that 43 percent of Republicans and 29 percent of all Americans still think he is a Muslim, according to a September 2015 CNN poll. In his message, there was an emphasis on ensuring our attitude towards Muslim-Americans is not merely a response that will revert to bigotry when the stimuli-triggering emotion disappears. The president’s intention appeared to be to set a new status quo.

The differentiation between Islam and those who commit atrocities in its name must always be acknowledged, but no differentiation can be practiced in terms of the treatment of American citizens. It is one thing to try to rally people together in times of adversity, but to combat the momentum of public opinion and establish a culture of universal respect is the duty of a leader. The demographic described by the term American is not fixed, and as a result, the mentality in which we approach the treatment of our fellow Americans must reflect and adapt to change. The president of the United States has a responsibility to all citizens regardless of their religious affiliations, and that is the message and tradition that must be continued.