Were Hawkeyes right to back Trump? 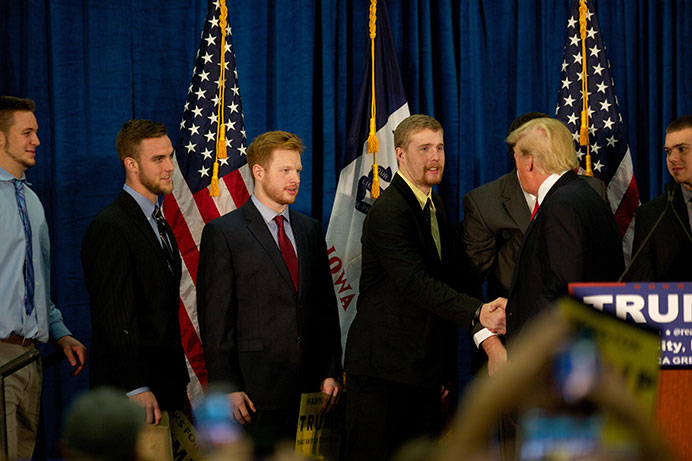 Members of the University of Iowa Wrestling Team meet Donald Trump at a political rally in the Field House on Tuesday, Jan. 26. Trump visited Iowa City to try and persuade voters to caucus for him next week. (The Daily Iowan/Brooklynn Kascel)

Before the caucuses, a group of Iowa athletes gave their tacit (and explicit) endorsement to Republican presidential candidate Donald Trump. Should they have done it?

On Jan. 26, Donald Trump held a rally in the Field House, attended by some 1,900 students and community members. Members of the Hawkeye football and wrestling teams joined Trump on stage as a way to show their support of him as a candidate. Was this a great moment in Hawk sorts history, one for fans and community members to remember with pride for years to come? Definitely not.

The athletes also presented Trump with a black and gold jersey with “TRUMP” printed on the back. According to Iowa Athletics Director Gary Barta, there were no violations of NCAA rules, because the jersey presented to Trump was not an official Iowa jersey. But my response to this is — who’s to know? It looks like an official Iowa jersey to me, and if someone isn’t educated on all of the details of what happened, they may see these athletes essentially endorsing Trump and think that this is reflective of the football team as a whole or even of the student body as a whole.

Now, other members of the team, or students who may be in classes with these players, have to stomach the fact that they support of a racist, sexist, homophobic leader.

I understand that the football players can support whomever they wish, and I support their right to do so. However, it may have behooved them to consider how this action of publicly endorsing Trump would reflect on them and the university. And maybe I shouldn’t be surprised that a selection of our athletes choose to support such a degrading, hateful person, considering the stereotype of athletes being dumb jocks.

But is it so bad for me to want this stereotype to not be true? All I can say is thank you to the rest of the football team that refused to join their teammates at the rally and the rest of the student body that makes an accurate representation of our campus decidedly anti-Trump.

As the screeches of campaign buses fade into the distance, and presidential candidates settle into New Hampshire hotels, Iowa moves slowly out of the national spotlight. Despite many candidates professing their “love” for Iowans and the state of Iowa, their gestures often seem to lack sincerity.

So it only makes sense that when Donald Trump came to town, Iowa City was abuzz with discussion. When Trump came to Iowa City, he used the greatest weapon at his disposal — student-athletes.

While I would rather have the entire Hawkeyes defense line up, one at a time, to tackle me than support Trump, the truth is, Iowa student-athletes — as with all students — are free to show their support for any candidate they choose. In fact, even if it is for Trump,.

Whether “experts” around the country choose to believe it, the Iowa caucuses are an invaluable piece of the presidential-election process. Moreover, as we saw on Monday, that colleges across the state were in session during the caucuses had a major effect on the results. And we are still seeing the impact of the caucuses as a whole as candidates continue to drop out of the race all week.

Even with this power, neither laws nor, as Athletics Director Gary Barta said, NCAA rules were violated when athletes took the stage at Trump’s rally. Upset as many may be about how student-athletes are treated by the NCAA — as revenue sources — there are certain things even the powerful NCAA cannot take away from these student-athletes: their First Amendment rights.

That our student-athletes wanted to take an active role in politics is excellent and shows the value this university places on all students being a part of the world around them.

Before the countdown to the caucuses reached the single digits and candidates flooded the state, the UI was gaining national attention for its athletics. It is undeniable that student-athletes play an important role at this university. And though the level of disrespect I hold for Trump is astronomical, to bring football players and wrestlers on stage was a brilliant move in a town that so idolizes them.

I disagree with the opinions of the wrestlers and football players who joined Trump on stage last week, but I respect their interest in joining an important political discussion, and I respect the university for not standing in their way to do so.