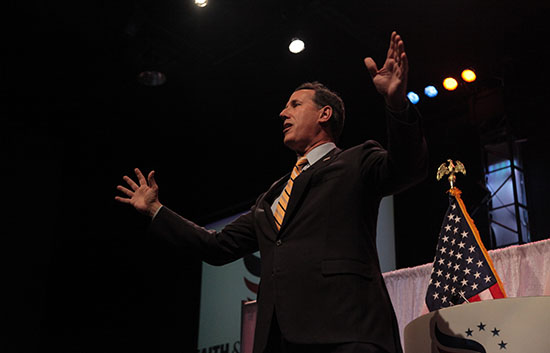 The Republican presidential field is down to nine.

In an interview Wednesday evening on Fox News’ “On the Record,” Santorum — who was the Iowa caucus winner in 2012 — announced he would end his 2016 presidential campaign; he threw his support to Florida Sen. Marco Rubio.

Santorum, 57, said he was looking a candidate that “really espoused the values that we believed in” and could bring together conservatives.

“He is a tremendously gifted young man, and he is a leader,” Santorum said.

Karen Fesler, a staffer on Santorum’s national campaign who helped pave the way to his win in 2012, told The Daily Iowan she was disappointed Santorum ended his campaign, but understood why.

“We felt like we were going to have a good night on Monday night, but obviously, we didn’t,” she said.

Fesler said she supports Santorum’s decision to endorse Rubio, as “they are very similar in what they believe and in their values.”

However, the political activist from Coralville said Rubio still has a long way to go.

“Iowa caucuses were the first step in a 50-step process, but we wish him all the best,” she said.

Paul, who also suspended his campaign Wednesday morning, only garnered 4.5 percent of the vote in Monday’s caucuses; Texas Sen. Ted Cruz came out on top with 27.6 of the preliminary votes.

Paul, whose father Ron Paul ran in 2012 and finished third in Iowa, had been polling in the single digits and running low on cash.

“It’s been an incredible honor to run a principled campaign for the White House,” Rand Paul said in a statement. “Today, I will end where I began, ready and willing to fight for the cause of Liberty.”

The decision to pull the plug on Paul’s first presidential bid just two days after the caucuses was a stunning blow to the campaign’s Iowa operations, sources close to the Iowa campaign told the DI Wednesday. 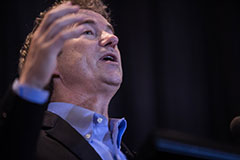 Several staffers who spoke on the condition of anonymity in order to talk openly, said they had expected the campaign to continue past the Feb. 9 New Hampshire primary.

Paul had whipped up more than 330 endorsements in New Hampshire, including many former staffers to his father’s 2012 bid.

After a disappointing finish in the state’s caucuses, he was expected to continue into New Hampshire rather than drop out, aides said at the time.

In the Jan. 30 Des Moines Register/Bloomberg Politics poll, Paul was at 5 percent. Republican Donald Trump led that poll with 28 percent, and now-Iowa caucus winner Ted Cruz was at 23 percent.

With 602 Republican likely caucus-goers surveyed, there is a margin of error of plus or minus 4 percent.

In addition to Paul and Santorum dropping out of the 2016 presidential race, two other candidates have ended their campaigns.

Former Maryland Gov. Martin O’Malley, who was vying for the Democratic presidential nomination, announced he was suspending his campaign on caucus night. Former Arkansas Gov. Mike Huckabee, who was also the 2008 caucus winner, also dropped out Monday night as a result of the caucuses.