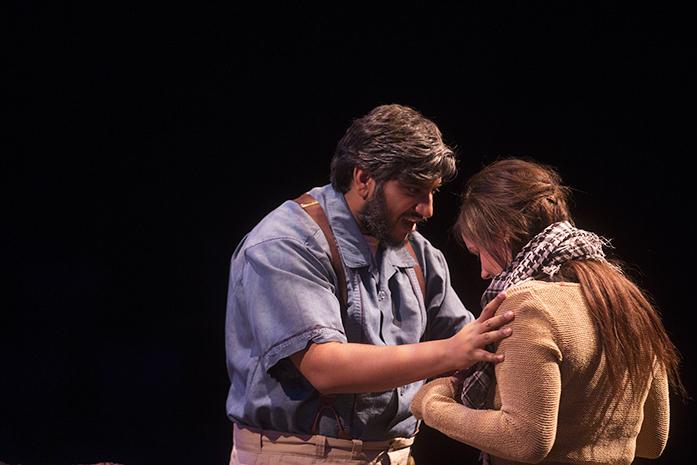 Sambit Misra (left) as Baba and Catie Councell (right) act out a dialogue during a dress rehearsal at the UI Theatre Building on Tuesday, Feb. 2, 2016. Food and Fadwa will premiere from Feb. 4-13. (The Daily Iowan/Ting Xuan Tan)

Honey seeps from layers of flaky phyllo dough, coating the golden baklava. Beside the dessert, finely chopped mint, parsley, and lettuce wait to become tabbouleh. The wooden table is piled with ground meat and minced onions destined for kibbee.

This food is a symbol of welcoming anywhere in the Middle East. But in this specific Palestinian kitchen, Fadwa Faranesh prepares it with a wedding in mind and a family to manage, all under the shadow of national conflict.

Iowa City can meet Fadwa and the dynamic Faranesh clan at 8 p.m. today in the University of Iowa Mainstage production of Food and Fadwa. Written by Lameece Issaq and Jacob Kader, M.F.A. directing candidate Marina Bergenstock spearheaded the ambitious production.

“I knew I wanted to do a story that mattered for my thesis production,” Bergenstock said. “But I got really stuck, and I wasn’t sure what to do, until I went to the library and found plays from the Middle East. I found Food and Fadwa and was crying at the end of reading it. I knew this was the story I needed to tell.”

The play revolves around Fadwa Faranesh, the young caretaker of her family.

“Statistically, there are fewer roles for women in theater and film, so to get to play such a strong woman is very exciting,” said Catie Councell, who stars as Fadwa. “Fadwa is imaginative, loving, but still flawed.”

She has been charged with crafting her sister Dalal’s imminent wedding feast. But a crippling curfew has fallen on her Israeli-occupied West Bank. It’s a tale of family dynamics, politics, and preservation of heritage through food.

A relatively new play, it first opened in the New York Theater Workshop in 2012 after spending time in the workshop phase. Including the Palestinian playwright Issaq, the cast is comprised of Middle Eastern actors. Iowa City’s production could not promise the same, an issue that compounded an already sensitive subject. With heritage a paramount theme in the plot, was it an appropriate production choice?

“There’s a lot of talk about who has the right to tell a story,” Bergenstock said. “Do I, as a white woman with Russian ancestry, have the right to tell this story? I knew that I wanted to, but I needed to do the play a service, not tell it though a privileged lens. Tell the story from a place of love, compassion, and empathy.”

The playwrights gave their blessing to Bergenstock, warmed by her passion for Palestine. Before production, Bergenstock made numerous trips to the Middle East, returning with deep research.

“The research she gave us was useful, but just talking to her was even more so because she knew so much, or at least knew where to find it,” said Sambit Misra, who plays Fadwa’s father.

Her trips struck a vision of the modern Palestine into focus. Since the official U.N. Partition Plan in 1947, which fractured the area to establish Israel, the fate of Palestinians has been unclear. Many live on allotted land on the West Bank and in Gaza. Others were relocated to camps in neighboring countries. In a camp in Lebanon, Bergenstock began to understand the situation.

“I’ve been reading a lot of Middle Eastern textbooks, but there was nothing like going there and experiencing it myself,” she said. “It’s hard to understand oppression when you don’t live in a place that is oppressed.”

Despite this, she did not find dejection. She was welcomed with traditional Arabic hospitality: a kiss on the cheek, strong coffee, and plates of warm pita or pistachio-sprinkled kanafeh. Relating that humanity to the UI community became crucial. 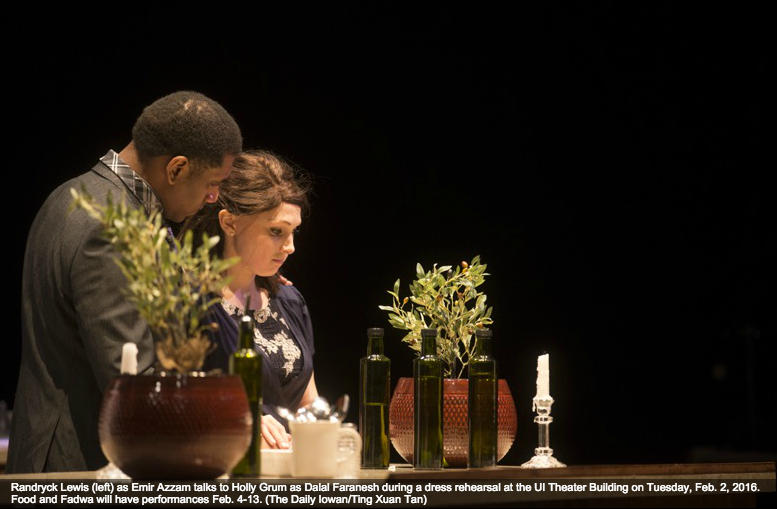 “Part of going to university is to learn things you do not know and to question the things you think you know,” Councell said. “That is why the research on this play was so integral, for me, is because it caused me to question my views of the Middle East and to learn more about Palestine.”

The more actors learned about Palestine, the less foreign their characters became.

“Instead of approaching the role as something I knew nothing about, I approached Dalal like I would any other character, a human being who has relationships and is fighting for something,” said Holly Grum, who plays Dalal. “Learning about the race and culture of this family only aided in this with specific physicality, backstory, and choices she makes.”

Learning to make tabbouleh also helped. Bergenstock can’t lead the audience in a cooking lesson, though, so the set, a three-quarter thrust, was designed with physical intimacy in mind.

“[Bergenstock] wanted as much as possible to push the set against the audience,” said scenic designer Kevin Dudley. “She wanted it to feel that their conflicts, pain, and everyday needs and wants are similar. We can’t have barriers when we’re trying to relate to them.”

The set comprises the heart of the Faranesh household: the kitchen. While distinctly Arabic in details like the seating bank, it is a modern kitchen, which mirrors Bergenstock’s field observations.

“Palestine is a war zone for the most part, so I struggled with how dilapidated to make the world,” Dudley said. “After speaking with [Bergenstock], though, it became important to see the Palestinians as we would see ourselves, as we’re not able to separate our humanity from theirs. That is what really drove the textures and colors inside the house.”

Though the audience may be struck by what is outside the house first. Hanging behind the set is a 22-foot wall, foam and Masonite painted to resemble concrete. Barbed wire twines along the wall’s top, further obscuring a view already out of sight. It symbolizes the Israeli West Bank Wall, a nearly 430-mile barrier between Israel and Palestine. Its shadow stretches, a silent and still background to family squabbles and fervent cooking.

But its concrete is not unbroken. Etched on its face in distinct white lines is an olive tree. A major source of income for Palestinians, it also symbolizes hope for the Faranesh family.

It may also prove a lasting mental image for audiences exiting the theater: branches twisting through new ideas.

“I think theater can change lives; otherwise, I wouldn’t do it,” Bergenstock said. “This can start a conversation, one I think will only continue.”