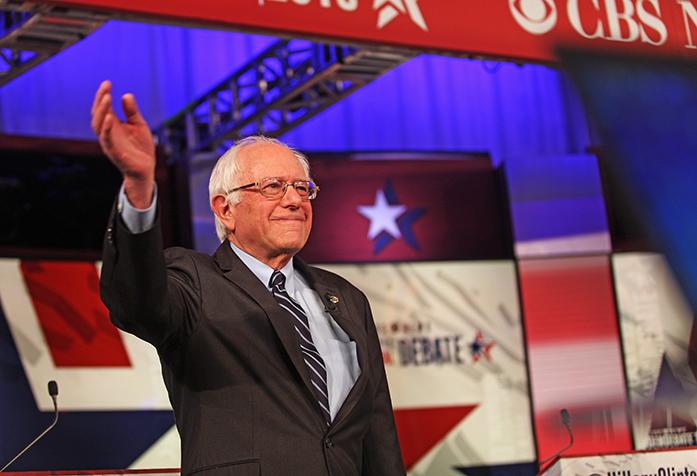 Democratic presidential candidate Bernie Sanders waves to the crowd during the photo spray before the start of the Democratic debate on Saturday, Nov. 14. The debate took place in Carnegie Hall on Drake University's campus. (The Daily Iowan/Brooklynn Kascel)

If it were up to Johnson County, Florida Sen. Marco Rubio and Vermont Sen. Bernie Sanders would have been the victors in Monday’s caucuses.

According to preliminary numbers, Texas Sen. Ted Cruz was crowned the winner of the 2016 Republican Iowa caucus with 27.7 percent of the vote, compared with business mogul Donald Trump’s 24.3 percent.

Former Secretary of State Hillary Clinton and Sanders were caught in a virtual tie for much of the evening, with the difference between the two fluctuating between just over 1 percentage point to under a half a percentage point.

But Johnson County wanted a different story to be told.

Rubio was announced as the Republican winner in Iowa’s most liberal county with 29.3 percent, and Sanders successfully swayed the county’s voters with a decisive 59.5 percent-40.2 win over Clinton.

Presidential candidates will now shift their focus to New Hampshire, where the first primary in the nation will be held on Feb 9. Sanders goes confidently; he currently holds a 20-plus percentage point lead in most polls.

The results weren’t a surprise, said Tim Hagle, a University of Iowa associate professor of political science. He iterated something Iowa City locals have known: the Johnson County caucus results would not reflect the statewide results because of the county’s liberal beliefs compared with other counties in Iowa.

Hagle said Rubio had a good chance of winning in Johnson County because of his mainstream establishment status on the Republican side.

Cary Covington, a UI associate professor of political science, said the key to wining Johnson County was the voter turnout.

“Since so many of the potential voters are students, the higher the turnout, the more likely students are turning out,” he said.

Covington noted that voter turnout was the key for Obama in the 2008 presidential campaign and could be important for Sanders in 2016.

Jim Tate, the first vice chairman of the Johnson County Democrats, said he is absolutely thrilled about Sanders’ win in the county.

“My guess is there must be a social-media campaign for Bernie; Bernie can seem to really overpower Hilary out there,” he said. “The fact that Bernie has laid out his plan and directly spoken to it repeatedly — his message has been resonating, especially to the younger generation.”

Tate, who was working at Iowa City precinct 06 at Mercer Park for the Iowa Caucuses, said he believes the high student population in Iowa City contributed to the win, which was very evident in his precinct.

Bill Keettel, the chairman of Johnson County Republicans, said Rubio did well because he is a good communicator.

“I’ve heard Rubio make speeches, and he communicates optimism, intelligence, grounded responsibility, and some other fine qualities,” he said.

Additionally, Keettel said, Republicans supporters were turned off the negative rhetoric used by other Republican candidates.