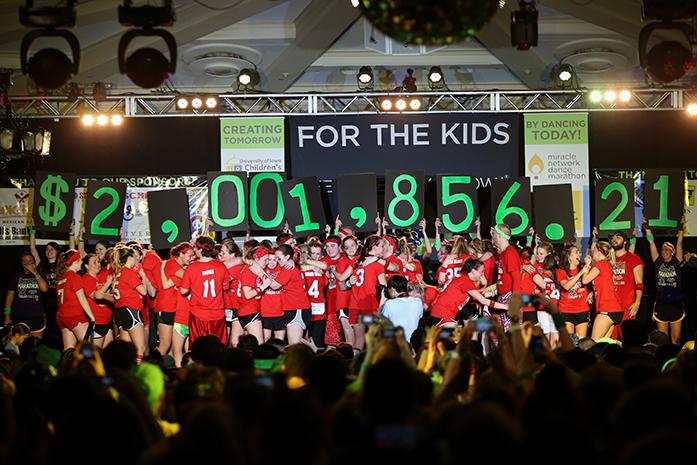 The total amount of money raised is reveled during the final hour of the Big Event in the Iowa Memorial Union on Feb. 7, 2015. The goal for Dance Marathon this year was two million dollars.This is Dance Marathon's 21st Big Event at UI.

The mother of an 8-year-old cancer patient in remission went through her own horror story.

Will Olson was 2½ years old when he was diagnosed with Stage 3 liver cancer, extremely rare in children his age.

“When you are a family going through this, it’s like your own personal horror story,” said Jenny Olson, the mother of 8-year-old Will, who is in remission.

Throughout the five years he spent fighting cancer, Will had eight rounds of chemotherapy and three surgeries. As of May 2011, he was declared in remission.

With Will in remission, the Olson family were reluctant to attend their first University of Iowa Dance Marathon in 2011 because they didn’t understand much about the organization, and Will had just undergone surgery the week before the Big Event.

“Once we understood what Dance Marathon meant and what it was doing, then we really got involved and continued to share our story,” she said

Olson said being able to share the family’s experiences through Dance Marathon has helped with the healing process of having a child affected by cancer.

“As a parent, one of the hardest things was when the treatments were over and the dust had settled. You kind of go through post-traumatic stress,” she said. “Having Dance Marathon there and knowing that there are other families in the same boat really helped.”

Olson said sometimes it is easy to forget that UI students did all of the hard work and raised the Dance Marathon money.

“It’s so mind-blowing that you have people in that age group with that level of passion and level of dedication,” she said.

Brian Olson, Will’s father, said he is touched by the selflessness of the students who participate in Dance Marathon throughout the year, not just on the big day in February.

“When I was their age, it’s not something I would have considered,” he said. “I am just amazed there are so many students that are willing to do what they do.”

Brian Olson said members of Dance Marathon have become family through all the work they do outside of official Dance Marathon business. All of the hospital visits, activities, and things they do for the families affected with cancer mean a lot to his family.

As for Will, his favorite part about the Big Event is hanging out with his friends and getting to stay up past his bedtime. He was proudly up past 11 p.m. during the event last year.

“I love jumping in the fun house and dancing,” he said

He has met a lot of friends through Dance Marathon and even sees some of his buddies from the hospital at the Big Event.

“It’s hard to drag him off the [dance] floor,” his mother said.

Jenny Olson gives the title of the most “selfless people she knows” to participants of Dance Marathon for all they do for kids such as her son.