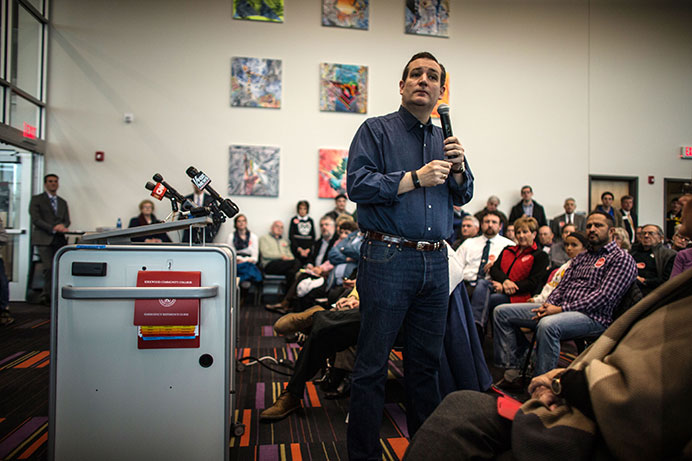 Texas Senator Ted Cruz speaks to a room of supporters in Coralville on Monday, Nov. 30. Cruz has recently gone from fourth to second in the polls. (The Daily Iowan/Sergio Flores)

WEST DES MOINES — A unique self-funded presidential campaign based on outspoken principles and heavy media coverage was not enough to crown Donald Trump the winner of the 2016 Republican caucuses Monday, despite a deeply entrenched antiestablishment political movement.

With 99 percent of the state’s precinct caucuses reporting, Sen. Ted Cruz, R-Texas, eclipsed Trump 28 percent to 24 percent, according to preliminary numbers by the Associated Press.

Within minutes of learning that the New York business mogul was not able to snare the win and that Cruz would win, hundreds of Trump supporters booed from the West Des Moines Sheraton, where Trump was expected to speak shortly before 10 p.m.

The results came at a crucial point in the 2016 race to the White House — five days before the next GOP debate and eight days before the New Hampshire primary, the second state to vote in the nominating process. Republican contenders will share a stage again on Feb. 7 for the ABC News/IJReview debate at St. Anselm College in Manchester, New Hampshire.

Trump now faces the challenge of building out a national campaign.

Trump, 69, is one of the oldest Republicans in the race. He completed approximately 60 events in Iowa over 40 days, from November 2012 to caucus night, according to a review of travel records.

VIDEO: @SenTedCruz campaign manager says it was the message, messenger that helped his candidate win the #IAcaucus https://t.co/OdtlvTFCgC

That placed him near the bottom of the 12 Republican candidates who visited this election cycle. Only former Florida Gov. Jeb Bush, Ohio Gov. John Kasich, and former Virginia Gov. Jim Gilmore spent fewer days in Iowa leading up to caucus night.

Trump has visited New Hampshire fewer times than his party rivals. He spent just 22 days campaigning in the Granite State from Jan. 1 to Jan. 26, according to the WMUR presidential candidate tracker.

The Trump’s rivals relied on traditional forms of campaigning before the Iowa caucuses with such tactics as small-venue appearances at coffee shops, high schools, and meetings with newspaper editorial boards.

But Trump pushed those aside, opting for large-scale rallies similar to those of his Democratic rival Sen. Bernie Sanders, I-Vt.

In the past two months, Trump drew close to 2,000 people to the Field House. He flew his custom-built helicopter to the fried-food and agriculture-rich Iowa State Fair.