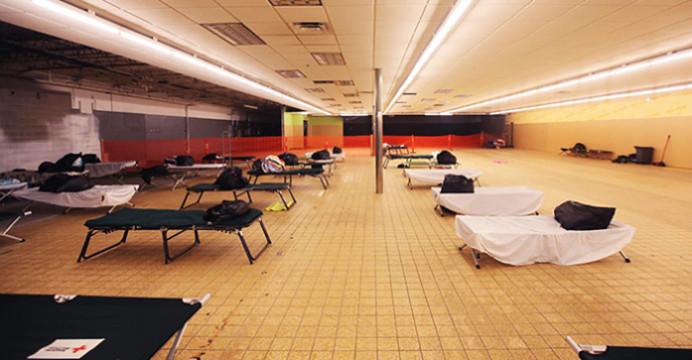 The temporary homeless shelter is seen on Tuesday, Jan. 27, 2015 in Iowa City, IA. The shelter opens in the evening and provides donated bedding and cots for those in need. (The Daily Iowan/Rachael Westergard)

With winter in full swing, the local shelters continue to work on housing those without residences.

The winter emergency shelter, 1925 Boyrum St., nestled a few miles from the University of Iowa, has been in use since mid-December.

The number of people using the space, as well as other shelters’ capacities, has increased modestly since last winter, said Mackenzie Bihl, the communications and marketing manager of the Shelter House, which operates the shelter.

“The lack of sleeping spaces is a testament to how many people are coming and taking advantage of the shelter,” Bihl said. “We expect 30 each night, and most nights we get more than that. There are a lot more people than we expected.”

She said she was impressed with the number of residents making use of the temporary space.

The annual point-in-time count — the number of how many homeless people are sheltered or unsheltered — took place recently, and Bihl said the results were evidence of how useful the winter emergency shelter has been.

“Five individuals were found this year and 14 individuals last year, and the numbers have been steadily declining,” she said. “We believe this is a product of the temporary shelter.”

Bihl said there has been approximately more than 840 used beds at the winter shelter house this winter, and that more than 100 individuals are using beds.

Another temporary shelter was formed in the dining room of the Salvation Army, 1116 S. Gilbert Court. It is open from 9 a.m. to 11:30 a.m. on weekdays and is run by a mixture of Salvation Army and other shelter volunteers.

Trisha Smith, the development director of the Johnson County Salvation Army, said the daytime shelter has served from 30 to 45 people a day since opening.

“The first day of service was Jan. 11, and we plan to keep the shelter open until sometime in mid-March,” Smith said. “Whenever the temporary homeless shelter closes, we plan on doing the same.”

Rachel Lehmann, the social-services coordinator of the Johnson County Salvation Army, said she knows the shelter is aiding the community because shelter residents are always extremely grateful for the warmth and care provided to them.

“The first three weeks have been going amazingly well; our service is definitely needed,” Lehmann said. “We see that in the number of people who come. This is a place where individuals can come to be a part of a group.”

Lehmann said Salvation Army members have received a number of donations in the form of winter gear and breakfast-food items, but they still need more volunteers to keep the temporary shelter running smoothly.

Bihl said the Shelter House was able to raise $35,000 in donations during the Out of the Cold campaign during the winter months. Members said they still have $10,000 until they are able to reach their goal of housing 90 individuals for the 90 coldest nights of the season.

The Out of the Cold campaign was held by the Shelter House to celebrate Giving Tuesday last year — an international movement of giving at the beginning of the Christmas and holiday season.

City Councilor Rockne Cole said he is immensely impressed with the work the emergency shelter houses have done, but there is still progress to be made.