Poverty on the rise locally 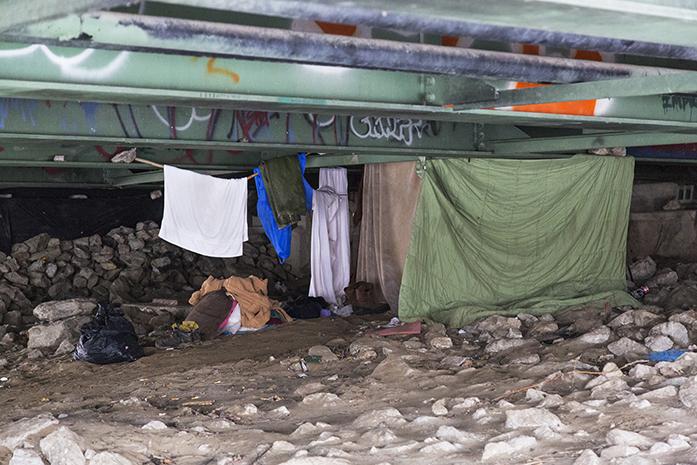 A makeshift home is photographed under an Iowa River bridge on Wednesday, Jan. 27 2016. Poverty rates in Johnson County are on the rise. (The Daily Iowan/Eden Hall)

One in 10 children live in poverty in Johnson County.

Johnson County has seen a 25.5 percent increase in the number of children living below the poverty line since the year 2000, according to Iowa Kids Count report, which was released Jan. 21 by the Child and Family Policy Center as an “indicator of family and community economic well-being” in Iowa.

The report states: “Children growing up in poverty [defined as $23,850/year for a family of four] are more likely than peers to experience stress and deprivation hindering development and readiness for school and life.”

According to the report, 11.3 percent of Johnson County children currently live in poverty.

“Kids are high priority when it comes to funding,” he said. “We need to do something about this.”

Botchway said collaboration between organizations is the key to lowering rates of child poverty.

“A great collaboration between communities in Johnson County and also with social services is essential,” he said. “We’ve been talking about what we can do within affordable housing and increasing the minimum wage. It’s about having the conversations about what we can do in a meaningful way.”

“We know this has been happening and Johnson County has the highest cost of living in the state,” he said. “This is why we want to raise that minimum wage because people are hurting. Nobody can live off $7.25.”

Carberry said raising the wage is only one way the county is working to fight poverty.

“We have a hunger task force. We’re trying to get as much food to local food pantries as we can,” he said. “There are 18,000 people in Johnson County who go to bed every night not knowing where their next meal will come from.”

Carberry said the county is working on affordable housing and transportation issues as well.

Lynette Jacoby, social services director for Johnson County, said even though Johnson County’s poverty rate is lower than in other parts of the state, the numbers are still concerning.

“It’s disturbing that there’s a 25.5 percent increase,” she said. “Because one child living in poverty is one too many.”

She said living in poverty can have a so-called ripple effect on kids.

“Academic achievement can be negatively affected as well as kid’s health when they aren’t getting the food they need as well as the safety and security they need,” she said.

Jacoby said there is short-term financial assistance from the county available to help those in need with rent and other expenses when people are living below the poverty line.

“We fund a number of programs,” she said. “The county provides money to support children and families in the county with our free-lunch program as well as the free medical clinic and the Crisis Center.”

Jacoby said the county is currently looking into ways to prevent what is known as ‘generational poverty’.

“When kids grow up in poverty, they often times fall behind.” she said. “They’re more at risk for teenage pregnancy and high school dropout, and when those things happen it’s much more likely the cycle will continue.”

Jacoby said Youth Empowered to Serve is one the programs aimed at preventing this type of poverty.

Through the program, teens can learn various skills for employment such as communication and personal development.

He said the effect poverty has on kids can have long-lasting effects, and the more prevention there is, the healthier families and the community will be as a result.