Guest opinion: Why I support Sanders 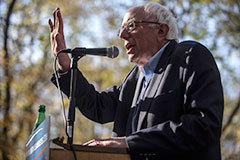 This is the story of how I came to support Sen. Bernie Sanders. It’s a true story — or at least as true as a fading memory can provide.

Some 40 years ago in Washington, I agreed to host a series of TV interviews with presidential candidates. Questioning the first few proved problematic. Their responses to questions seemed to be coming from tape cassettes implanted in their skulls. They’d heard the questions before, and we’d heard their answers.

How to make their performances more revealing? The possibilities of someone tipping over a candidate’s chair or unexpectedly throwing them a baseball were attractive but rejected by the producer.

The ultimate solution was found in a question put to presidential candidates then, and throughout the years since, often in Iowa living rooms. “Senator, let’s make two assumptions. One, those of us here think you are ‘right on the issues.’ And two, you are elected president. Now tell us, why will coal-mine owners have less ability to maintain coal miners’ unsafe working conditions than they do now?” (One could substitute the military-industrial complex’s control of defense budgets or oil-company subsidies.)

Some candidates stared blankly. Some became angry. Apparently, few if any had ever thought about the problem, and none offered a solution.

When I put the question to Sen. Barack Obama in 2007, he replied, “Well, Nick, I’ve been a community organizer.” I’d visited with Saul Alinsky and read his books. Both Obama and I were familiar with Heather Booth’s Midwest Academy in Chicago, where I’d learned community organizing. I too quickly leapt to the conclusion that Obama got it. He would become our national community organizer-in-chief. I was mistaken.

Sanders not only gets it, he makes it explicit. He rejects chants of “Bernie, Bernie” with “this is not about ‘me,’ it’s about ‘we.’ ” “This campaign is about creating a movement of millions of Americans fighting to transform our country with demands that government represent all of us,” he has said.

I like his proposals for increased minimum wage, health care for all, avoiding unnecessary wars, tuition-free college, justice for African-Americans, and equal pay for women, among others.

I’m impressed with his authenticity, enthusiastic crowds, rejection of PACs, and funding a campaign with millions of supporters making $27 average contributions. He’s had experience as a mayor, congressman, and senator. He understands the federal government’s working and impact. Up against Republican candidates, he’s as (or more) electable than the others. He has the highest Net favorability numbers.

But most important to me? His belief that a government of the major donors, by the lobbyists, for the wealthy is not what the founders had in mind. That the establishment’s proposals, whether from Democrats or Republicans, look a lot more like capitulation in the cause of campaign contributions than compromise on behalf of the American people.

It’s his lifelong advocacy that governments exist for the 99 percent; his knowledge of what’s required before a government can serve the people — that the people must lead before their leaders will follow. His campaign has begun building that citizen organization.

Are you in the 1 percent? You have many establishment candidates to choose from. Otherwise, whether you’re a Republican, Democrat, Libertarian, or Green, it serves your interest and mine if Sanders’ vision and voice comes booming out of Iowa’s precinct caucuses, loud and clear.