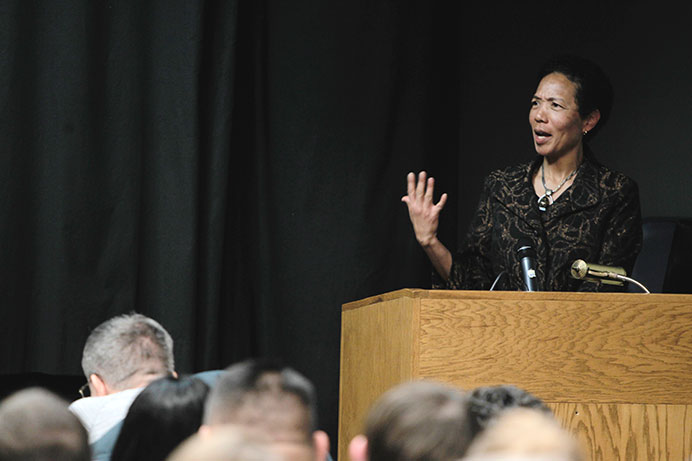 Georgina Dodge, the UI associate vice president for Diversity, listens to a question about diversity in the IMU on Wednesday. (The Daily Iowan/Ting Xuan Tan)

“The UI is moving forward with developing a Bias Assessment and Response Team — which will use the acronym BART— for the purpose of addressing incidences of bias that do not violate policy or constitute crimes,” he said. “Planning sessions and meetings with stakeholders will be held during this semester with a process developed by May.”

“One of the most important aspects of having BART is the ability to assess what is happening on campus. It can help identify areas for potential training or other issues that need to be addressed in order to meet our institutional goals for advancing inclusion and diversity and creating a welcoming environment for all at the University of Iowa,” she said.

Hansen said the UI hopes to complete the planning by May in order to officially launch the team in the summer.

The main goals of BART would include creating a mechanism to report and investigate potential bias incidents, communicating an ethic of care to affected parties, creating consistent response protocols, and streamlining communication among key offices.

Jasmine Mangrum, a co-head of the President’s Black Student Advisory Committee, said she thinks BART is going to be an easier way for students to communicate issues and for the UI to respond to them.

“BART is a more centralized system for students to report incidents of bias. Instead of having to go one UI office to report one type of bias and go to different office for another discriminatory act, this team will serve as a unifying office,” she said.

Mangrum said she believes that BART will not only benefit the university but students as well.

“We don’t have a lot of information about bias and discriminatory things happening on campus,” she said. “Yes, we hear a story here and there, but nothing is concrete. BART will change that by providing a reliable reporting system.”