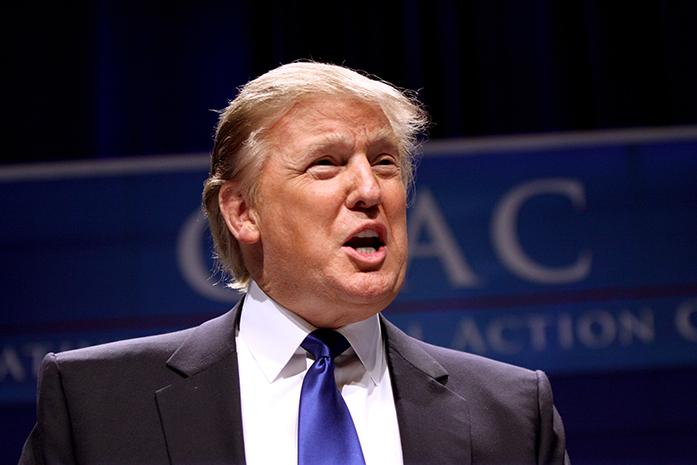 In June 2015, businessman Donald Trump stumped like almost any other presidential hopeful at Brown Deer Golf Course Ballroom in Coralville. Around 200 people showed up, not a paltry crowd, but far from the thousands that he amassed in the months following.

Tonight, the former reality TV star will return to Johnson County, this time smack dab in the middle of the University of Iowa campus, in the Field House south gym.

“I think he is trying to incite hatred in a peaceful college town, but nothing he says or does surprises me anymore,” Iowa City resident Veronica Tessler said.

And if one thing is guaranteed, it is that the event will probably mirror the candidate, like nothing anyone has ever seen before in American presidential politics.

Most candidates get a few seconds of sound bites, Trump’s are almost always carried on live network TV. Other hopefuls use pumped-up music to rev up the crowd; at past rallies the sounds of show tunes has serenaded attendees. Politicians stick to a strict stump-speech script, Trump can go on for minutes about the Wollman ice rink in Central Park. His campaign proudly claimed the Nixon-era phrase “the silent majority” while his rhetoric has emboldened white supremacists.

The juxtaposition of a Trump rally and the core of the People’s Republic of Johnson County has led some community members to vow to protest Trump’s appearance today.

“If normal, everyday, hard-working, humanity-loving citizens do not stand up and say, ‘No,’ to this man and his hateful rhetoric, then we become complicit in any hatred or pain or oppression that stems from Trump and his supporters in our city, in our state, and — the gods forbid — if he is elected, our country,” said UI graduate Jared Krauss in a prepared statement. “I for one will not be silent. I will not go gently into the night.”

The UI Department of Public Safety has designated the South Quad as one area for demonstrations in response to the event. But Director David Visin was quick to add his officers, which will assist the U.S. Secret Service, are “there for safety.”

Any sort of response to hecklers veto that occurs during Trump’s remarks would be from the campaign, he said.

Tessler said she could not speak for everyone, but the group aims to stage a “peaceful protest,” which should not involve the police.

“This is a peaceful protest; there’s no reason anybody should be taken to jail,” she said. “It’s part of our First Amendment right to political assembly.”

UI officials said business would continue mostly as usual for the rest of the Field House — the only affected area will be the south gym, which the campaign took over at 1:30 p.m. Monday. The pool will also be closed during the event time, but neither fitness nor academic classes will be affected.

In past Iowa stops, Trump has personally directed the removal of protesters. While campaigning in Alabama, attendees beat a Black Lives Matter protester as he was in process of being thrown out. At another rally in Las Vegas, NBC recorded video of an attendee shouting Sieg Heil as a protester was being led away.

If protests were to occur, Trump would be far from the first political candidate to encounter them during a stop in Iowa City. Members of the local Occupy Wall Street organization yelled over former House Speaker Newt Gingrich stumping in December 2011. Earlier this year, protesters from Planned Parenthood tailed former Hewlett-Packard CEO Carly Fiorina during her tailgate outside of Kinnick Stadium.