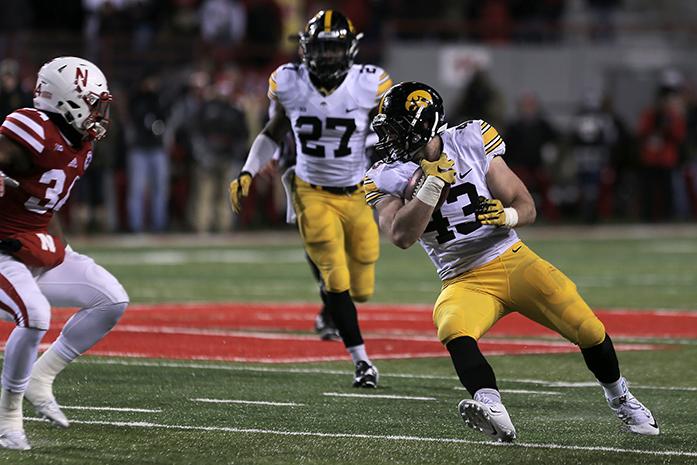 Iowa line backer Josey Jewell runs back an interception during the Iowa-Nebraska game at Memorial Stadium on Friday, Nov. 27, 2015. The Hawkeyes defeated the Cornhuskers, 28-20, to finish off a perfect regular season. (The Daily Iowan/ John Theulen)

The Iowa football team announced Jan. 22 that the Seth Wallace — Iowa’s recruiting coordinator for the past two years — will take over as linebacker coach.

Jim Reid, who had been Iowa’s linebacker coach since 2013, recently decided to jump to the Boston College coaching staff, taking the position of defensive coordinator. It left Iowa with a coaching vacancy, and one Kirk Ferentz decided to stay in-house with.

Ferentz said the team will try to fill the now-vacant recruiting-coordinator position sometime after signing day, Feb. 3 this year.

Wallace is from Iowa and played for Coe College. The Grinnell native has been coaching since 2003, when he accepted a position at D-3 Forest Lake College. After three years coaching the Foresters, Wallace was hired as a graduate assistant at Iowa from 2006-08. After the 2008 season, he was hired as a defensive-back coach at Valdosta State and spent five years there.

In 2013, of course, he became Iowa’s recruiting coordinator.

“I am excited to coach our linebackers as we begin preparations for 2016 and beyond,” Wallace said in a release. “We have a great group returning who have been well-coached by Coach Reid. I am very appreciative for this opportunity and look forward to this next phase of my career.”