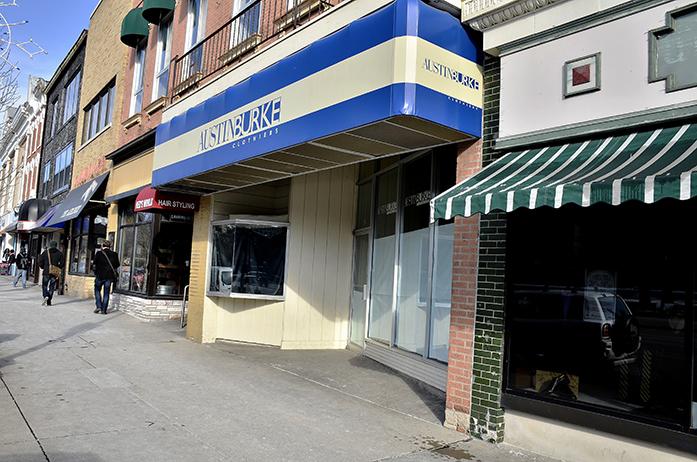 An architect firm is taking over the space left by Austin Burke Clothing in downtown Iowa City. (Daily Iowan/Karley Finkel)

Once of the creative forces behind several local buildings built within the last 25 years is setting up shop downtown.

Due to the high amount of past, present, and future construction projects in the area, OPN Architecture firm recently announced they will be opening up a branch in downtown Iowa City.

Justin Bishop, an associate principle for OPN, will be heading the new Iowa City office. The firm already has branches in Cedar Rapids, Des Moines, as well as Madison, Wisconsin, and Bishop said the decision to expand to Iowa City was an easy one.

“It’s a market we’ve been in for decades,” he said.

Past OPN projects at the University of Iowa have included: renovations on the Iowa Memorial Union, an addition on the Iowa Writer’s Workshop facility, and restoration work on the Old Capitol.

However, one of OPN’s most recent, and visible projects has been the construction of the UI’s new Hancher Auditorium. The glistening, $176 million theater building is nearly complete, and set to open in June. Bishop said it’s been fun putting the finishing touches on the shiny exterior skin.

“It’s what everybody sees when they drive by,” he said “It’s been very rewarding.”

Daniel Thies, principal of OPN, said the Hancher project has been both an exciting and lengthy one.

Thies also said a new building for the UI’s College of Pharmacy would be a future project. According to OPN’s website, the facility is in the design stage and has a current budget of $96,300,000. Thies confirmed that construction will begin in 2017, with bid documents going out in the fall of this year.

“It’s a great opportunity and a fantastic project for us,” he said.

Theis said adding an office downtown will make it easier for staff to hold meetings and oversee local construction.

“I have people in Iowa City literally every day of the week,” he said. “We felt it was time to reinforce the commitment to the community that has been so good to us.”

Theis said Iowa City is “alive and growing,” just like his firm. He hopes that this new location will mirror the success OPN has had in Madison, another college town.

“Having a Division 1 academic institution adds a vibrancy to the area.” Thies said.

Iowa City can expect to see the firm arrive in July. The firm will employ about a dozen people. The new OPN office will be located on Clinton Street, above the former Austin Burke store and overlooking the Old Capitol.

Iowa City mayor Jim Throgmorton was in approval of OPN’s expansion into town.