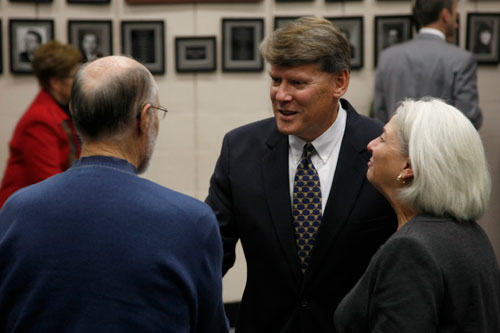 New City Manager Tom Markus shakes hands with people at a reception in his honor on Thursday in City Hall. The line of eager attendees stretched out the door, with people wearing anything from suits to sweatshirts and plenty of men in uniform, all waiting for a handshake and a little face time with the new city manager. "I'm happy to be here; this is a wonderful place to be … there's a lot of potential for improvement," said Markus, who was formerly the city manager of Birmingham, Mich. "I hope to leave the city better than how I found it." (Rob Johnson/The Daily Iowan)

Markus, who has been the city manager since being hired in 2010, has officially accepted an offer to become the new city manager in Lawrence, Kansas, starting March 21. Lawrence is the home of the University of Kansas and has a population of around 90,000, slightly larger than Iowa City.

Markus says he enjoys working in a university town.

“It opens up engagement between students and the city,” he said. “Lawrence is a university town. It’s a larger jurisdiction, so there are different challenges, but similar ones as well. There’s usually a more heightened awareness about social justice in university towns.”

Former Iowa City Mayor Matt Hayek said hiring Markus in was the best and most important decision he made during his eight years in office. He believes that Markus’ departure is a real loss for the community.

“In five short years, Tom organized and energized City Hall in many important ways,” Hayek said. “He streamlined operations, made numerous department-level hirings, resurrected our economic-development efforts, and positioned us strategically for the future. His administration helped make Iowa City resurgent again. His blend of professionalism, experience, and vision will have a lasting impact.”

Hayek is also confident Markus will succeed in his new career.

“Iowa City’s loss is Lawrence’s gain,” he said. “I am confident the Lawrence City commissioners will be very satisfied with their hiring.”

Geoff Fruin, the assistant city manager since 2011, said Markus has been a great mentor.

“I didn’t know Tom when I started, so I’m very thankful he provided the opportunity to move to Iowa City,” Fruin said. “I admire him for his ability to see the big picture when tackling issues and also his ability on taking on the tough issues head-on. It’s been inspiring for me.”

Fruin said he will be sad to see Markus go, but the latter had set the city up for the future.

“His absence will be felt, and we will miss his leadership, but he’s put us in a place to succeed,” he said.

Some have speculated Fruin will become the next city manager, but Fruin said he thinks it’s important the City Council takes some time to think before making a decision.

“I think it’s going to take some time, and they should really evaluate what they need,” he said. “It’s premature to speculate whether or not I would be a good fit.”

He said that though he would be interested in taking the next step and applying for the position, but he couldn’t give a definite answer at present.

“If it lines up to where it’s a good fit, I will compete for the position,” he said. “It’s a process that needs some time to unfold, and until that time, it’s hard to say.”

Markus said he thinks Fruin would be qualified, but he would not be involved in the hiring of a new city manager and the decision is City Council’s.

“[Fruin] came here with a really extensive background, and I think very highly of him. I think he has the confidence and expertise to be a great city manager,” Markus said. “I think he would compete well with anyone who applies for this position.”