Fit to be fit 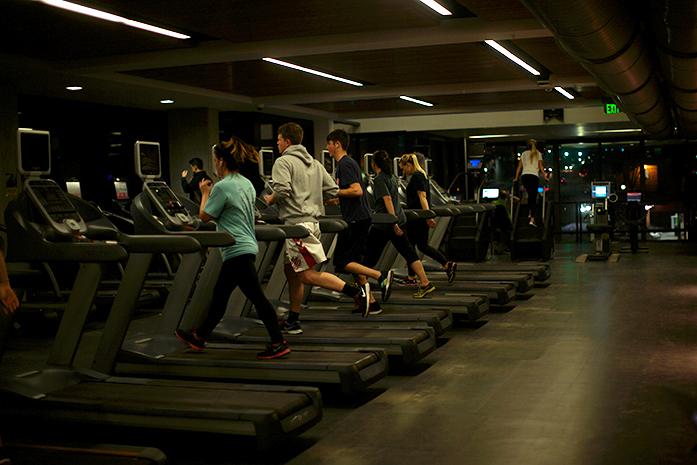 Keeping New Years resolutions, many students run at the CRWC at the University of Iowa on Jan. 21, 2016.

There’s something about the new year glistening with possibilities that has the ability to bring out the inner athlete in some people.

This newfound commitment to a healthier lifestyle draws many to the gym, a trend that can be seen on the University of Iowa campus. The numbers of entries to on-campus gyms increased in January and February more than any other months, according to data from the Campus Recreation & Wellness Center.

The data span the years 2011-2015 and show entrance numbers for January can fluctuate, possibly because of most students coming back after break, but typically stay within the range of 70,000 visitors for the month. However, some years, the Rec Center saw over 90,000 visits during the first month of the year.

“Everyone, students and the general public get the fitness bug around this time of year,” said Justin Holman, assistant director of marketing and membership services for UI Recreational Services.

According to the Rec Center data, the facility sees peak entrance times between 4 and 7 p.m. when students are done with classes or people are getting off work.

Holman said the best way to avoid the rush would be to try out other UI fitness facilities, such as Fitness East.

Trying an alternative facility can save gym goers the headache of tracking down popular equipment, such as the treadmill or bike, because of the considerable number of people in the building at one time, he said.

This number is low compared woth last year, in which 78,684 visits were accounted for in January. Nevertheless, gym goers still have another week to increase the already large number of visits to the facility.

“It can be annoying and frustrating because there are a lot of people in and out of the building,” said Elly Hansen, a supervisor at the Rec Center.

One of Hansen’s duties is to keep tabs of people in the building. She said this is why her job becomes more hectic this time of year. However, she expects to see the influx of people die down soon.

“It’ll die down during mid-February and for sure after spring break,” she said.

Matt Stancel, an assistant director of Recreational Services, said people tend to come into the gym more because it reflects the nature of fitness around this time of year. He said he doesn’t expect the majority of people entering the building this month to stick around much longer.

Stancel accounts the lack of a smart, time-bound, and goal-oriented plan to the short time people will spend working on their resolutions at the gym. Furthermore, he pointed out that people should hold themselves accountable for their goals by telling a friend or family member of their plan of action.

For those new to the fitness world, Stancel recommends not equating fitness to hopping on the treadmill for a half-hour everyday.

He suggested trying out one of the many classes the Rec Center offers such as Zumba or Pilates, which have a variety of modifications to fit any level of endurance.