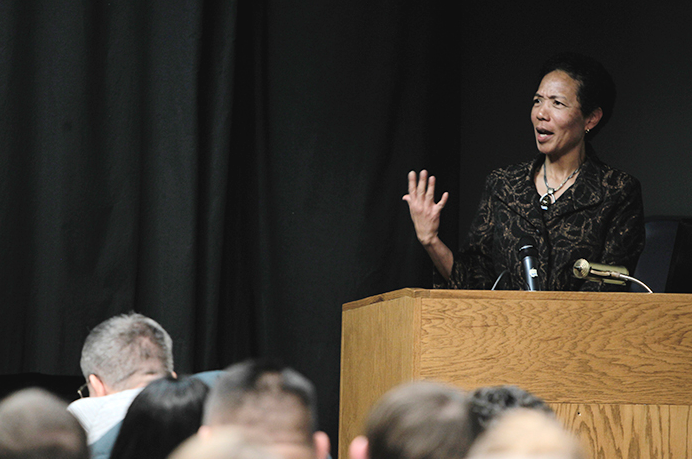 In a room packed wall-to-wall with eager community members on Wednesday evening, a top University of Iowa official divulged plans for the diversity community in 2016.

Many in the audience had been anticipating the information.

“We’ve worked together to create interventions that are supportive of under-represented students so that they are not marginalized by the larger population,” said Tabitha Wiggins, a multicultural initiatives coordinator in the Office of Student Life. “I hope that she’s able to articulate the things she’s been working on and that those things will be made clear and plain.”

Dodge announced that a new College of Liberal Arts & Sciences GE requirement for Diversity and Inclusion would begin in the summer of 2017 for undergraduate students.

She also announced that Success at Iowa, an online course designed to help new students prepare for orientation and their time on campus, and International at Iowa, instead of being separated, would collaborate for this year’s Orientation in order to discourage discrimination against international students.

Dodge also touted the Center for Diversity and Enrichment’s multipurpose room in the University Capitol Center and said it will be having a grand opening on Thursday.

Beginning in February, weekly conversations will be held in the room in order to promote discussions about what can be done in the Iowa City community to produce solutions about how to be more inclusive with diversity.

RELATED: UI pushes ahead on diversity

Dodge also commemorated successful projects that were pushed through in 2015, such as the breakthrough with Building University of Iowa Leadership for Diversity, successful training in Safe Zone, and the helpfulness of using The World Café as a sounding board for the entire community to list their concerns and ideas on different issues.

“The thing I’m most proud of is the pro-active programming and the training of community members so that they can interact across difference,” Dodge said, “I have a million and one goals, but what we must do is hone in and work on special issues. I think that’ll take work with the community to identify what those issues are and what we should tackle right away.”

With all of these steps being taken to ensure more progress, some people want more to be done.

UI graduate student Thomas Kindred said he’s concerned about the demolition of the Hawkeye Apartment complex. The apartment building is for graduate students. He expressed his thoughts in a Q&A session after Dodge spoke.

Dodge said it was an important issue to discuss.