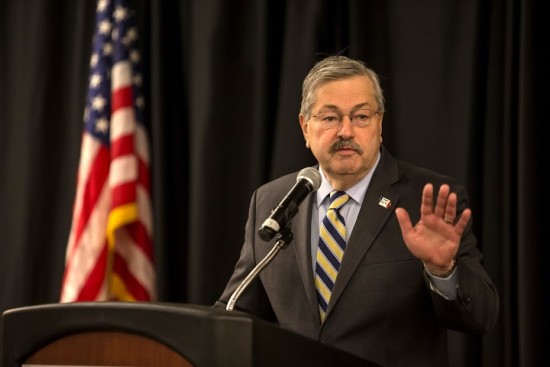 Nationally, the Republican Party is in a state of flux and facing an identity crisis with numerous blocs splintering off. But in Iowa, Republicans aren’t worried about the influential group separating.

“Portrait of a Party on the Verge of Coming Apart.”

That was the headline that was splattered across Atlantic’s website on Jan. 18. It introduced a descriptive account of a party in the middle of an identify crisis.

As Iowans prepare to turn out to caucus in fewer than two weeks, the Republican Party is confronting a breakup of sorts between its core ideals and identities. Across the country, the GOP’s once-commanding establishment wing is wrestling with consistent eruption from ethnic disagreements and mistrust among its working-class bloc.

“I haven’t seen this large of a division in my career,” said Sen. John McCain, R-Ariz., in an interview with the New York Times earlier this month.

In some states, the number of factions of Republicans is too many to count.

But in Iowa — the first state to nominate a presidential candidate — political watchers say a far less catastrophic situation will play out, despite recent flare-ups between its establishment and the evangelical wing.

Ann Selzer, Iowa’s premiere pollster, is the founder of Selzer & Co., a nonpartisan company that conducts the Iowa Poll for the Des Moines Register/Bloomberg Politics.

Selzer said Wednesday that her company has no insight into whether Iowa has two or three Republican Party factions.

“I’m not one of the gloom/doom folks we hear out there, particularly the Democrats, who say this will be the end of the Republican Party; I don’t buy it,” said Eric Woolson, a longtime Iowa political operative who most recently served as strategic adviser for Wisconsin Gov. Scott Walker’s now-dead 2016 presidential bid.

For several months, there have been murmurs that the Iowa GOP may split at the seams, from two to three or more factions, interviews with The Daily Iowan has shown.

Despite talk nationally that the Republican Party could split, sources tell me they're not worried about @IowaGOP doing so. #IApolitics

Both are key figures in Iowa’s evangelical or social-conservative wing, which historically has found great success in bringing Iowans to caucus for its candidates each cycle, often through heavy snow and ice.

Just this week, those murmurs grew into louder rumblings, thanks in part to Iowa’s Republican Gov. Terry Branstad breaking his silence on endorsing a White House hopeful.

“Ted Cruz is ahead right now. What we’re trying to do is educate the people in the state of Iowa. He is the biggest opponent of renewable fuels. He actually introduced a bill in 2013 to immediately eliminate the Renewable Fuel Standard. He’s heavily financed by Big Oil. So we think once Iowans realize that fact, they might find other things attractive but he could be very damaging to our state,” Branstad — the longest serving governor in American history — said at the Iowa Renewable Fuels Summit in Altoona on Tuesday.

Asked if he would want to see Cruz defeated, Branstad shot back: “Yes.”

A recent Fox News poll found that 66 percent of Cruz supporters in Iowa felt “betrayed” by politicians in their party.

The poll was conducted by phone Jan. 4-7 among 504 likely Iowa Republican caucus-goers. The poll had a margin of error of plus or minus 4 percentage points.

The more moderate establishment Republican from rural Iowa — who raked in more than $9.5 million in his 2014 re-election bid — has only endorsed a candidate before the caucuses once. In the 1996 cycle, he backed Kansas Sen. Bob Dole.

Branstad’s allies spun the governor’s announcement that he wanted to see Cruz crushed in the caucuses as a mere political division on the issue: the Renewable Fuels Standard.

“This division yesterday is solely due to the governor’s concern about rural Iowa,” Woolson said. “I don’t see it so much as a faction as a difference of opinions on an economic issue to our state.”

Woolson, a former Branstad operative, and other sources close to the governor said they don’t expect the well-funded Iowa GOP to splinter before the Feb. 1 nominating contest, even if the party’s winner on caucus night is Cruz or brash New York billionaire Donald Trump, who leads in some state polls here.

Woolson and other longtime GOP operatives said the party would “get behind” Trump even if the party does split off. Some watchers predicted that some Iowa conservative Democrats and Ronald Reagan-era Democrats would also join Trump.

Should the state party splinter, Tim Hagle, a University of Iowa associate professor of political science, said the third wing would likely be that of the Libertarian base.

Cruz, Trump, and Sen. Rand Paul, R-Ky., could all pull significant weight away from the Iowa party’s two primary wings, he said.