Another side of the mat 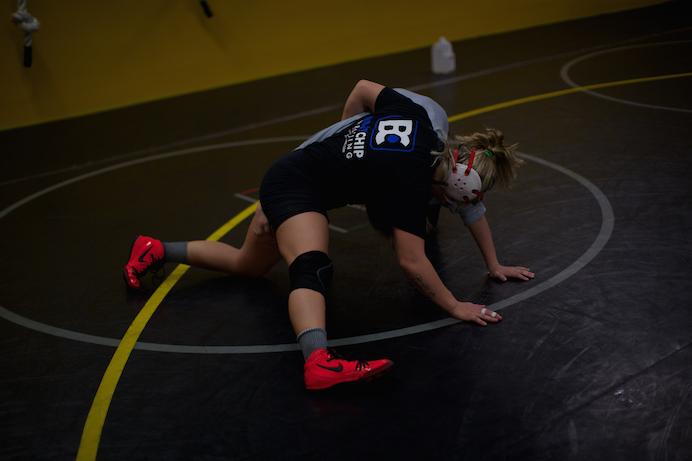 Two women from the U.S. Women's Olympic Wrestling Team practice in the Iowa Wrestling Room on Tuesday, Jan. 19, 2016. The olympic team will be making an appearance at the Iowa Men's Wrestling home meet on Thursday, Jan. 21, 2016. (The Daily Iowan/Brooklynn Kascel)

At the Iowa wrestling team’s Big Ten dual meet with Purdue on Friday, the U.S. women’s Olympic wrestling hopefuls will get to showcase the sport with four wrestle-off matches before the Hawkeyes take the mat.

The wrestle-offs coincide with a training camp U.S. women’s wrestling coach Terry Steiner is in the midst of holding on Iowa’s campus. Steiner, a former national champion for the Hawkeyes in 1993, wanted to give his athletes a chance to see Carver-Hawkeye before the Olympic Trials come to Iowa City on April 9-10.

That, however, wasn’t the only reason he set the camp and wrestle-offs here.

“These girls have grown up in an environment that maybe these guys have never felt,” Steiner said. “They haven’t always been appreciated, and I want them to understand what they do is very much appreciated and that wrestling is appreciated not only in the state of Iowa but in Iowa City as well.”

It’s a chance for a public that adores wrestling to witness a side of the sport that is in the process of growing. Women’s wrestling was added to the Olympics in 2004, and the sport has been slowly getting larger through the years.

According to the National Wrestling Coaches Association, there are 28 varsity women’s wrestling programs across the nation, though none of them are Division-1 teams.

However, that’s not to say it couldn’t happen in the future.

“With Title IX and all that, the opportunities are there for it to eventually becoming a D-1 sport,” said Clarissa Chun, a 2012 bronze medalist at 48 kg. “I train with a men’s program, and it would be amazing to have a women’s program along side it.”

There’s also a strong push from certain parts of the wrestling world to get the sport to emerging sport status by the NCAA. That would pave the way for eventual NCAA-sanctioned national championship, a huge achievement for any sport in this country.

“Anything like that makes a case for itself with excitement,” Iowa head wrestling coach Tom Brands said. “You take the natural steps, you create conversation and keep chipping away. You just have to keep doing what you’re doing, and good things will happen.”

Growing the sport is important, of course, but one of the ways to do that is to win. Chun was the lone medalist for the women’s team at the 2012 Olympics, and it would be a huge boost for the sport if the team fared well at the Rio Olympics.

But in order to get to Brazil, the path starts in Iowa City. The wrestle-offs will be best-of-three matches and will determine who gets to compete at the Pan American Olympic Games Qualifying Tournament in Frisco, Texas, on March 9.

Under USA rules, a former world medalist can challenge a world-team member in a weight class who has yet to qualify for the Olympics, which is exactly what will happen on Friday.