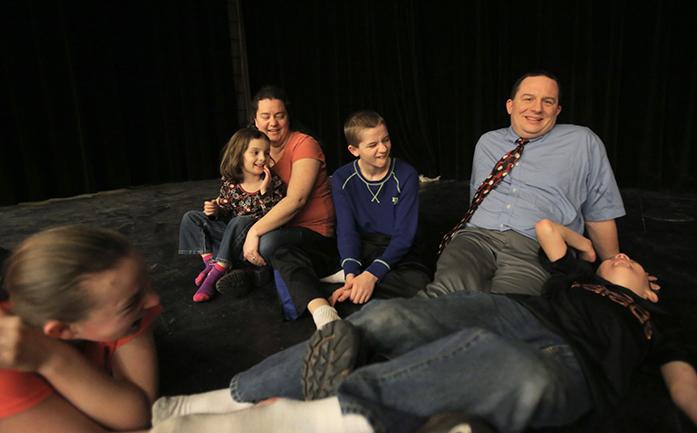 Simeon Smith and his family joke around in the IMU on Monday, Feb. 2, 2015. Simeon is celebrating five years of cancer free and is graduating at this year's Dance Marathon. (The Daily Iowan/Margaret Kispert)

One of the biggest philanthropic groups in Iowa City took over the Coral Ridge Mall on Sunday.

“We have usually one family event per month leading up to the Big Event,” Kennedy said. “This one is a new event; we’re partners with the Children’s Museum, so families can get free admission there.”

In addition to the Children’s Museum, families were able to get free food from several restaurants in the food court and see a movie at the movie theater. There were more than 300 family members and 150 Dance Marathon volunteers at the event, Kennedy said.

“It’s pretty much a free for all day at the mall for all the families involved with Dance Marathon,” she said.

One of those families were the Havemans. Michelle Haveman, whose daughter Moriah was diagnosed with leukemia in July 2014, said Dance Marathon had been there for her family since the very beginning.

“They’re amazing,” Haveman said. “They had volunteers right off the bat there, they’ve been a huge encouragement for her. It means so much to have people around she can interact with.”

The event was not just for those children diagnosed with diseases but for their entire families.

“We just stopped by because it was close to home,” Haveman said. “I think we’ll stay and check out some of the activities, though.”

She said events such as Sunday’s were great opportunities for Moriah to socialize.

“She’s such a people person; it’s awesome to have all these people around who are interested in her,” Haveman said.

UI Dance Marathon was founded in 1994 in conjunction with the Children’s Miracle Network, and it has raised more than $16.5 million for children. It has also contributed $5 million toward the construction of the new UI Children’s Hospital, according to the group’s website.

The group’s Big Event, the dance itself, will take place during 24 hours on Feb. 5 and 6. Last year, the event raised more than $2 million for pediatric patients at the UI.

Moriah said she looked forward to one of the activities offered at the Children’s Museum in particular.