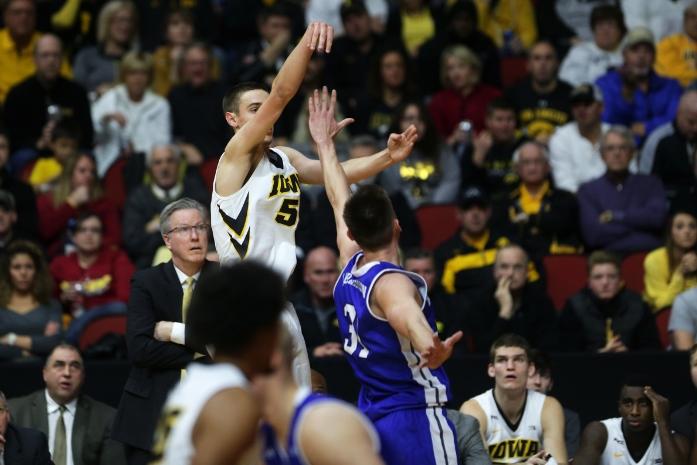 DES MOINES — Nicholas Baer played a majority of the Dec. 19 game against Drake as Jarrod Uthoff sat in foul trouble.

And the redshirt freshman walk-on played unquestionably the best game of his Hawkeye career as the Hawkeyes topped the Bulldogs, 70-64, in the Big Four Classic.

“I’m just excited to be here,” Baer said after putting up 13 points, 7 rebounds, and 6 blocks. “I always wanted to come to Iowa. I always envisioned myself as a player, not just as a practice player.”

Uthoff sat for the final 15:03 of the first half as his replacement made an immediate impact.

Baer scored on a breakaway dunk on an assist from senior Mike Gesell and three minutes later stole the ball and dunked to give the Hawkeyes a 15-14 lead, their first of the game.

Still on the scout team in practice, Baer provided a much-needed spark off the bench for the Hawkeyes.

Head coach Fran McCaffery heralded Baer as a five-position player in the preseason, and to hear his teammates tell it, Baer’s game Dec. 19 should come as no shock.

“He brings great energy. He knocks down open shots. He doesn’t try to do too much,” said Uthoff, who had 5 blocks of his own as Iowa set a single-game school record 14. “He’s the ultimate hustle guy.”

Despite 30 minutes on the court and an impressive stat line — Baer said he wasn’t sure he’d ever blocked 6 shots in a game — he was quick to credit him teammates after the game.

The Bulldogs pestered the Hawkeyes throughout the game, staying close enough throughout to raise a few Hawkeye heart rates at the end of the game.

Iowa led 58-47 with 8:51 to play, but then the Bulldogs scratched their way back into the game.

Drake’s defense kept the Hawkeyes scoreless for more than three minutes to make the score 58-54. After the teams traded 2-point field goals, Baer hit a 3 to put the Hawkeyes up 7 with 4:25 to play.

Again Drake clawed back, cutting the lead to 2 with 1:37 to go, but the Bulldogs stalled on offense.

The Hawkeyes left Wells Fargo Arena with the victory with a needed victory and the knowledge their bench became that much deeper with Baer’s big game.

“I am not surprised at all,” McCaffery said. “When I first saw him play, I was kind of shocked he didn’t have as much recruiting attention.”

Baer requested a red shirt his freshman year to get stronger, but as McCaffery watched the walk-on practice last year, he said he wished Baer had been eligible.

He was eligible on Dec. 19 and was a difference maker on both ends of the court, which may prove to be a big reward in the future.

“Obviously, we’re going to have to give him a scholarship at some point,” McCaffery said. “He’s got a game.”