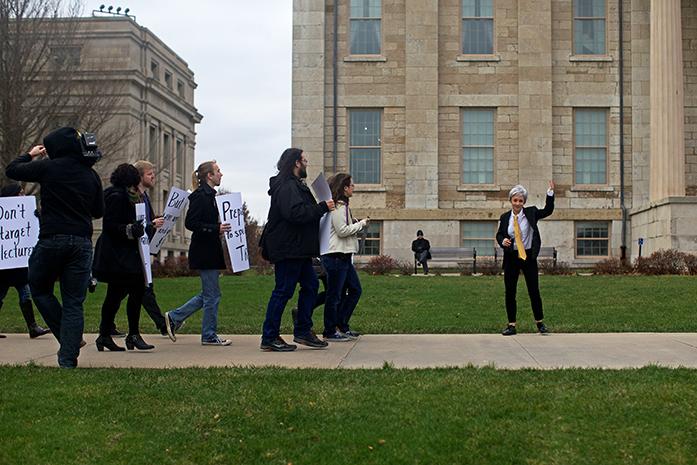 Carleen Maur leads a group of protesters to the president's office in hopes that he would answer a few questions on Thursday, Dec. 17 2015. (The Daily Iowan/Jordan Gale)

Protests against University of Iowa President Bruce Harreld are heating up before winter break.

On Thursday, the group Iowans Defending Our Universities held a protest calling for the resignation of Harreld. The demonstrators met at the Old Capitol Town Center and then marched to Harreld’s office in Jessup Hall.

There has been ongoing controversy surrounding Harreld and the state Board of Regents’ decision to appoint him as president. Many have criticized his lack of prior educational experience, mistakes on his résumé, and most recently, Harreld’s off-the-cuff statement made during a Staff Council meeting about how lecturers “should be shot” if they’re unprepared for class, has caused an even greater uproar and sparked Thursday’s protest.

UI graduate student Rachel Walerstein, one of the protesters, said she believes Harreld should resign.

“He’s an illegitimate president who was appointed through an illegitimate search,” she said. “We are here today to demonstrate our concerns and call for his dismissal. The off-the-cuff things that he has said indicates how little he cares about the people in this institution and his ignorance.”

Walerstein said she fears with Harreld as president the UI will become about profit, not education.

“Harreld could ruin the culture of learning here and make it about profit and income,” she said. “His language in many of his reports are concerned with one thing, and that’s money. He’s been installed in this leadership position for which he has no experience for.”

Around two dozen protesters ranging from students to faculty and community members took part in the protest. Some held up signs with phrases such as “You’re an unprepared president.”

A protester who requested anonymity due to an affiliation with the university, was concerned about how the UI’s standard for education maybe compromised.

“This is an institution of higher education and knowledge,” the protester said. “It is wrong to treat it like a business and wrong to put education on the back burner for profitability.”

UI graduate student Carleen Maur dressed up as Bruce Harreld and led the protesters to the President’s Office. There, Maur took questions from the protesters concerning Harreld’s presidency. Protesters inquired about Harreld’s personal relationship with the regents and the recent sexual-assault survey.

“I’m just here to take the University of Iowa from great to greater,” Maur said to each question asked.

Maur said she believes Harreld is unqualified for his position and has demonstrated that through his comments.

“Harreld and his administration have shown that they view campus, students, faculty, and adjuncts as statistics and numbers that they can profit off of and not people,” she said. “He’s ignorant of issues on campus that don’t pertain to finances, and we cannot be quiet about it.”

During the protest, Maur entered the President’s Office with protesters and asked if Harreld was available to speak. Unfortunately, his secretary informed the group, he was away meeting with donors.

Maur joked about Harreld’s absence, saying, “There’s an imposter on the loose who never seems to be in office.”

At the end of the protest, Maur encouraged others in attendance to attend Harreld’s first public forum on Feb. 23. 2016.