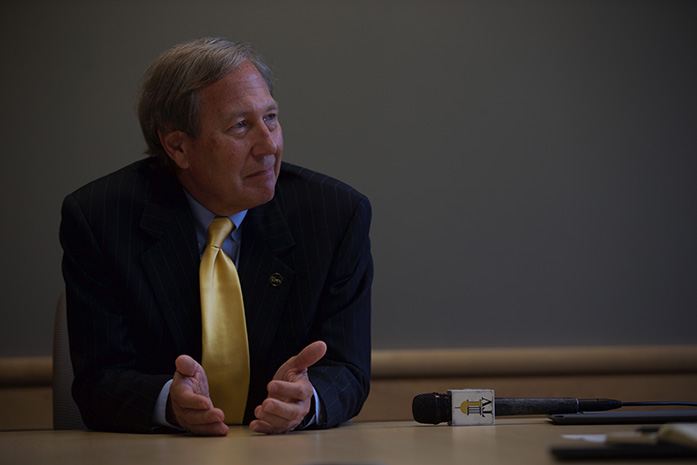 University of Iowa President Bruce Harreld will soon get some advice to help him adjust to the media role of a university president.

Harreld recently hired crisis communication consultant Eileen Wixted of PR firm Wixted & Co. to help represent himself more professionally in the presence of the media, he said in a statement released through the Office of Strategic Communication.

“When I was selected as president I reached out to colleagues in similar positions across the country for advice,” Harreld said. “They recommended I seek outside media training and that I pay for it myself in order to get the most candid feedback possible.”

Harreld has a corporate background but said he wanted to make sure he could be as transparent and natural to the UI community as possible. He is paying for the consultant with his own money.

“I felt it was important to work with an Iowa firm and heard from several people that Wixted & Co. had a strong reputation and good sense of the Iowa media landscape,” he said. Wixted has previously worked with the University of Northern Iowa during the controversy over the Price Lab School closing.

Wixted, based in West Des Moines, assists individuals in establishing a strong media presence and helps the media develop a personal relationship with its clients.

Harreld said he wanted to ensure how he represents himself in the media is done the right way.

“I never thought covering something out of my own pocket would be construed as a bad thing and I’m disappointed to see it painted in that light,” Harreld said

UI spokeswoman Jeneane Beck said officials would recommend such consultation for whoever the state Board of Regents selected to be president of the UI.

“We do mock interviews, and we go over the things that he does well and things that need to be worked on,” she said. “He is the person that is being interviewed the most. He is the one in the spotlight.”

Beck said it was Harreld’s descision to pay for the services himself, and he chose the company to go through.

“He got recommendations to work with Wixted & Co.,” Beck said. “He was referred to them by other colleagues of his. Harreld was also insistent that he pay for this himself. He felt that if this is what he needed to work on, he should pay for it.”

Frank Durham, a UI journalism associate professor, said Harreld’s decision to hire a media consultant is common for this kind of high-profile position.

“Many executives hire media consultants to develop their media programs and skills,” Durham said in an email. “That function is often located in-house. In the current case, it is just not as common for the president of a major university to pay such a consultant out of his own pocket as Mr. Harreld has done.”

Beck also said the move wasn’t out of the ordinary.

“This is not something that is uncommon for higher-education and high-profile jobs,” she said. “He has had some media training before, but it is an important skill to be a good communicator.”