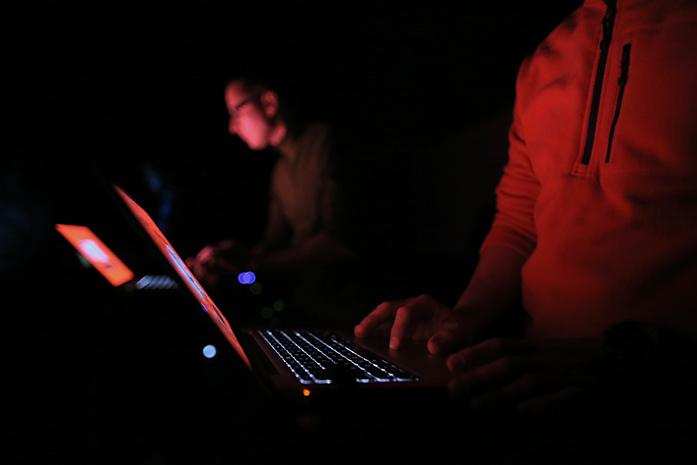 Iowa’s Laptop Orchestra will play the computer keyboard rather than the piano keys.

An orchestra, for most, conjures thoughts of bellowing brass, whispering woodwinds, sonorous strings, and powerful percussion.

Many people probably picture an ensemble performing classical compositions from a yellowed piece of sheet music inscribed with the creations of master composers of the classical era, such as Beethoven or Mozart.

What if that ensemble was a group of laptop computers and the sheet music was instead lines of code?

The University of Iowa Laptop Orchestra began in 2014 to provide graduate-student-level composition students with a method to solve notational, formal, and time-scale performance problems, create new sounds, and then use those sounds in order to create original compositions.

Numerous methods yield these songs, from manipulating the sound created by a physical action, such as tapping on the laptop or blowing air into the microphone to using code to simulate frequencies that would be impossible to reach with a physical instrument.

UI Visiting Assistant Professor Christopher Jette, the director of the Laptop Orchestra this year, is also part of the Grant Wood Fellowship Program, which selects artists from around the country  to teach at the UI for an academic year.

Jette, who earned his doctorate in composition from University of California-Santa Barbara, didn’t always accept of technology in music. 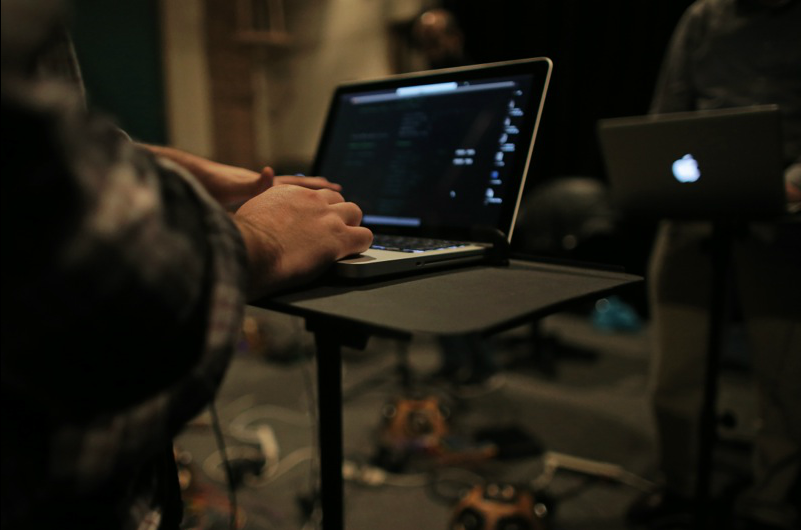 “My undergraduate degree was performance and violin,” he said. “Actually, I was very conservative. In fact, I rejected computers entirely.”

In his mid-20s, while pursuing a master’s degree in composition, he got his first computer and developed an interest in the history of electronic music and experimental art.

“I realized, oh, that’s actually a really good crossover for me, because I actually had a background in visual arts, so this was a really good way for me to sort of bridge those two,” Jette said.

“What I’ve tried to set up is a paradigm in which you don’t need to know much more than how to press buttons on a computer and interact with a mouse,” Jette said. “Because there are people with different levels of software and programming knowledge, I teach people how to program, I teach people how to rewire speakers, all these different skills that go into making electronic music.”

Hamidi and Wilson, who are pursuing doctoral degrees in music composition, joined the Laptop Orchestra with the hopes of expanding their horizons and testing their musical chops.

For Wilson, the most fascinating aspect of being in the group is the level of risk involved.

“There’s a possibility that the whole piece might just crash because of one problem or another,” he said. “If for some reason there was a power outage or something terrible that went wrong in the program then — boom — it all goes out.”

Hamidi is more interested in the intellectual aspect, she said, and the ability to specialize the sounds.

“Having this idea of traditional ensemble, you can pursue all these electronic, avant-garde, imaginative ideas that as a composer you might have,” Hamidi said.

One thing on which they agreed is the importance of forging a connection between the performers and the audience.

“The only thing I think when I’m making music is how to fulfill my audience; when they leave, they enjoyed,” Hamidi said.