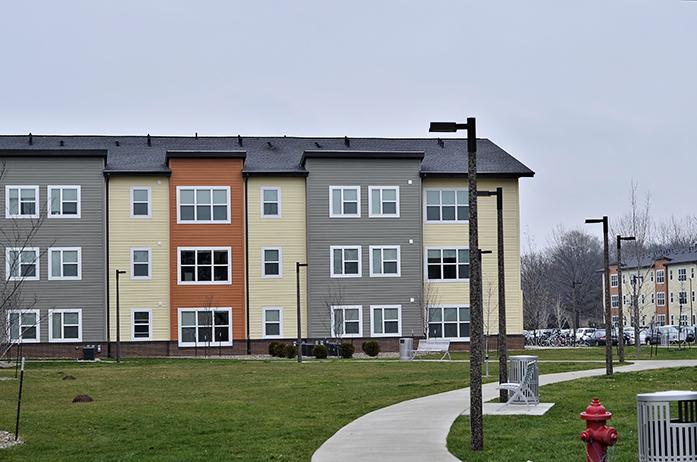 After claims that graduate student housing advertised on campus is missing a key ingredient — affordability — graduate students have formed an advocacy group to push forward their requests.

Sam Lustgarten, a University of Iowa doctoral student, and fellow Aspire at West Campus residents have started Graduate Students Against Gentrification to counter what they say is a 10 to 12 percent increase in rent over the last two years.

“Graduate students can’t afford graduate housing, which is pretty ironic,” he said. The complex is located at 158 Hawkeye Court.

Aspire at West Campus opened its doors in the August 2014. Its value stands at $31 million. The Daily Iowan previously reported the UI gave Balfour Beatty Campus Solutions, a Dallas-based company, a ground lease to construct and manage the property.

“The increase in rental rates for the next lease term at Aspire at West Campus were driven by above average increases in both utility rates and real estate taxes,” Kathy Grim, senior vice president for marketing and communications at Balfour, said in an e-mail. “These costs are outside of our control and unfortunately were higher than anticipated.”

“I don’t represent Aspire. Aspire is managed by Balfour Beatty Group. It’s not university property, per se,” he said.

Stange said the UI has a ground lease, or a longer-term lease, with the company.

“I really can’t speak on their behalf,” he said.

Lustgarten said his group currently has 128 members on its roster. The group’s primary goal is to bring a petition, which offers a solution-based approach to the perceived issue, to UI President Bruce Harreld’s attention

“We’re asking President Harreld to renegotiate the contract the company has been given and protect graduate students,” he said.

Ideas in the petition include graduate assistantship salary increases, restricting rent to make up only 30 percent of the $18,720 half-time stipend, partially restricting the ability of faculty and staff to live at Aspire, or delaying the construction of the new Hawkeye Drive complex.

A member of the group will also speak to Harreld about the issue more casually.

“Unfortunately, the large rate increases over the last two years at Aspire are disproportionate to market rates and graduate student stipend increases in a population already burdened with minimal stipends, increasing debt loads, and/or international students who are limited in their ability to obtain outside income,” Schoenfeld wrote in an email.

Schoenfeld said GPSG strongly recommends Balfour Beatty reconsider its rate strategy. If not, GPSG would seek the support of the UI administration.

Lustgarten said he will be unable to afford living at Aspire next year.

Another UI student is considering her options after the increase in rent prices. Raven Maragh, a graduate fellow, said her lease-stipulated rent would be $875 when Aspire first opened. Maragh said rent then went up to $899.

Now, a one-bedroom apartment is $999, and Maragh said she may leave Aspire altogether.

“I would have never signed at Aspire if I was shown a trajectory of these price increases in just two years,” she wrote in an email.

Correction: In a previous version of this story, the Daily Iowan incorrectly reported that Raven Maragh may leave Iowa altogether. Maragh will be paying a moving company to leave Aspire if she cannot re-sign her lease at the current rate. The DI regrets the error.