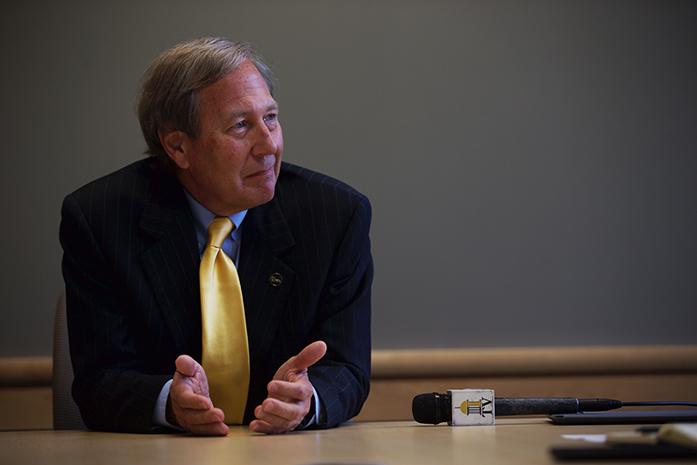 After a whirlwind of controversy following his appointment, Bruce Harreld gave the state Board of Regents his first presidential report.

The new University of Iowa president, who has been on the job for about a month, addressed concerns with funding and campus issues.

He emphasized the $4.5 million in funding for the UI the regents are requesting from the state Legislature will be used for his commitment to support and increase faculty.

Harreld said the money would go towards very specific colleges and departments.

“We’re being picked off. Cherry-picked. Our middle ranking faculty are very appealing to a lot of other universities,” he said. “I do think we have a compensation problem and that we’re having a hard time backfilling against that.”

Harreld pointed to losses in publication rankings suffered by the UI, such as in faculty salary and overall reputation.

The emphasis on faculty compensation, Harreld said, would help the university.

“The stronger our faculty are, the better off our dissemination of knowledge, i.e. teaching and the better our research is,” he said. “It’s really the core of the institution.”

Harreld said the UI’s reputation as a classic liberal arts and sciences school was strong and something to be proud of, but must be improved.

Harreld said he has done some administrative restructuring to further these goals.

Rod Lehnertz, the UI interim senior vice president for Finance and Operations, will lead a committee on an operating team that will oversee what “excellence” needs to happen each day. Barry Butler, executive vice president and provost, will lead a team on long-term strategy and policy.

Harreld also said after meeting with several faculty, staff, and students, he is asking the community to bring forward input on what issues need to be addressed on campus.

He has asked the UI undergraduate as well as the graduate and professional student governments to collaborate through a committee to streamline the issues to be put forward.

Harreld said he anticipated gaps in resources and policy when addressing issues but stopped there.

“As I said the other day, I’ve got my own thoughts. I’d be glad to share them, but I know that if I stand atop of a building and share them right now, there’d be no one up there with me,” he said. “So the question is: Where do we want to go as a community in that process we’ve launched?”