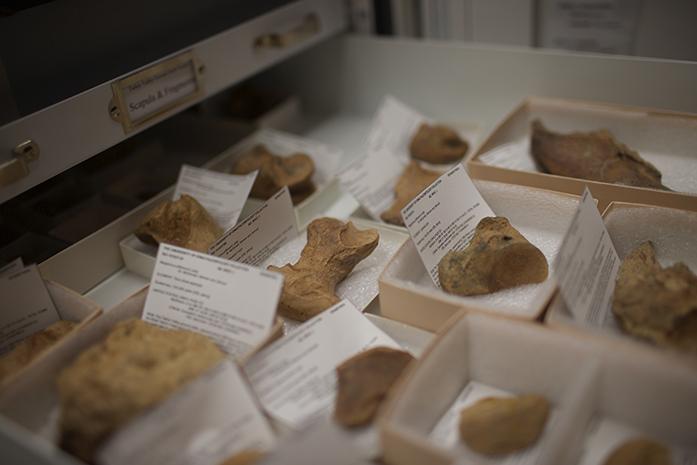 Some of the oldest residents on campus have a new home.

Earlier this year, more than 22,000 specimens from the University of Iowa’s fossil plant collection were moved from their previous residence in Halsey Hall to a new, safer location, said Tiffany Adrain, collections management specialist for the UI Paleontology Repository.

“The conditions in Halsey weren’t ideal. There was no temperature control,” she said. “A lot of fossils were being destroyed. We even had cockroaches eat the labels of an entire collection, so we don’t even know what any of the specimens are anymore.”

The paleontology repository contains over 1 million fossils, ranging from wooly mammoths to fossil plants, collected and donated since the UI was founded in 1847.

Adrain said she sent a proposal to the National Science Foundation asking for museum-quality cabinets to replace the ones the fossil plant was housed in currently.

“The old cabinets were actually built especially for the collection in the 1920s, but they did not age well,” she said. “With rocks sitting inside of them, they suffer.”

The National Science Foundation responded to Adrain’s request with a $196,000 grant to buy new cabinets, as well as to employ students to help move the various specimens across campus. She also received help from a somewhat unexpected place.

“By some fluke, I was able to get two rooms in Trowbridge, where the main repository is, instead of in Halsey,” Adrain said.

Besides making the collection more centrally located, officials with the repository are also in the process of digitizing data on its collection and putting the information on the Internet, Adrain said.

“Only about 60,000 specimens are available on the online database currently, and we only have around 142,000 specimens cataloged at all,” Adrain said. “The collection is well-organized, but even I don’t know everything that’s there.”

Paul Puglisi, a UI student helping Adrian with the mammoth task, said he plans to continue to work in the repository until he graduates in the spring.

Maja Sunleaf, a UI junior majoring in anthropology, said she began as an intern in the repository last spring.

“I helped make room in Trowbridge and package specimens up to be moved in the spring,” she said. “I love working there. Right now, I’m curating a collection of fossilized plants and seeds and putting them on the database.”

Adrain said there is still a lot of work to be done in the repository, and she estimates only around 140,000 specimens out of a total of more then 1 million in the collection have been cataloged at all.

“We’ve had this collection for 150 years and it’s still growing, so all the cataloging is still catching up,” she said. “There’s still a ton of work to be done, literally, a ton. [We were just] bequeathed 10 tons of rocks containing fossils earlier this year.”

Puglisi said the repository is a real part of history that the UI owns.

“They’ve been collecting fossils there since the 1800s. It’s mind boggling the amount of specimens you have, everything from wooly mammoths to fossil plants,” he said. “I think students should at least check it out and realize we have all these fossils that are millions of years old right on campus.”