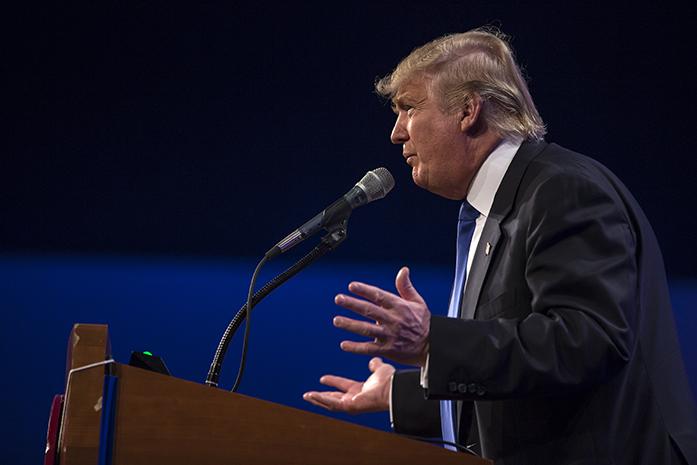 Donald Trump delivers a speech at the Lincoln Dinner in Des Moines on Saturday, May 16, 2015. Trump spoke critically about American business and commented on how "nothing is made here anymore."

Just when you thought Democrats and Republicans were pretty much like Unionists and Confederates (which is not that far off the mark, geographically), reality slaps you in the face by demonstrating they’re nowhere close to the combatants in the Car Air-Freshener War.

Meanwhile, back at the Car Air-Freshener War, it turns out to have been a vicious battle between two fresh-air titans.

No, not Terry Gross.

Yeah, I know, the names don’t quite stir the blood as Johnny Reb and Yankee Doodle Dandy do, or, for that matter, Donald Trump and Ben Carson. I mean, your blood hasn’t been stirred until Trump and Carson do the stirring.

But Exotica and Little Trees have been locked in a fresh-air battle for some time now over which one stirs the fresh air better. Of course, we’re talking car air-fresheners here, and autos (and other internal-combustion-driven vehicles) have about as much to do with fresh air as the Moon does, give or take a molecule. You know, I’ll trade you this molecule of methane for that molecule of carbon dioxide.

Well, OK, not. It has been a titantic battle worthy of Ronda Rousey and whomever, a slug-it-out, knock-down war with no quarter given. And we don’t mean the quarter you give, grudgingly to a panhandler.

By the way, what ever happened to Ronda Rousey and her titantic fights? Oh, yeah, right: an iceberg.

Anyway, back at fresh air, Little Trees won after a long war actually fought in the courts about trademark violations or something. Whatever. I dozed off once the lawyers started jabbering. Talk about your jabberwocky.

And we were talking about cars and fresh air, not wilderness and fresh air. I’ve long thought that if you’re truly interested in fresh air, you could just go to where real pine trees grow. (Hint: They don’t grow in your car, try as they might.)

But at least the air-freshener war took our minds off of Trump and Carson and all those Muslims in New Jersey celebrating 9/11 on TV as the towers collapsed. At least, that’s the way Trump remembers it.

Nobody else does (except Carson for a while, until he didn’t).

Maybe Trump needs a bit of fresh air. We could send him little pine-tree doodads.