Payne: The Year of Ferentz 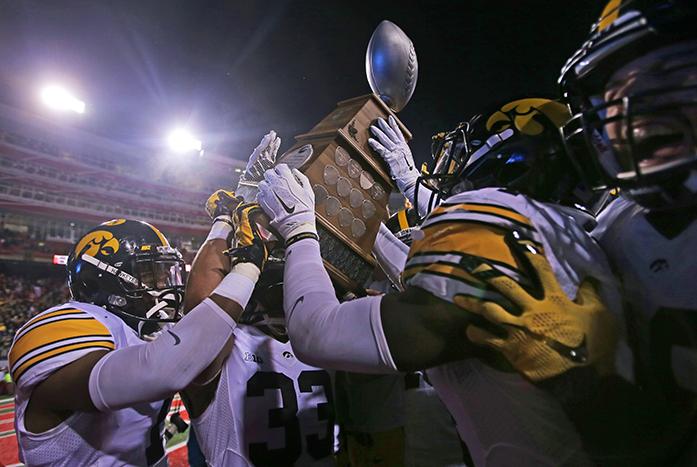 The Iowa team picks up the Hy-Vee Heroes Trophy after the Iowa-Nebraska game at Memorial Stadium on Friday, Nov. 27, 2015. The Hawkeyes defeated the Cornhuskers, 28-20, to finish off a perfect regular season. (The Daily Iowan/Margaret Kispert)

LINCOLN, Nebraska — Before the season began, we all wondered whether Iowa head coach Kirk Ferentz was still right for the Hawkeyes. If you had asked me to answer that question, I would have told you he was not.

I thought this team would finish with 5 to 7 tallies in the win column, and Ferentz’s buyout check would be all but signed following a Black Friday loss to Nebraska.

I was wrong. The Hawkeyes finished a perfect regular season for the first time in the modern era, and they are one win from the College Football Playoff. This team has passed every test it has faced along the way.

This is the Year of Ferentz.

It started with the quarterback change in January, and each step since then has been more impressive than the last. Shutting up the doubters at Iowa State, winning with a gutsy performance against Pittsburgh, pulling out a victory on the road at big, bad Wisconsin, embarrassing Northwestern on its home field, avenging a last year’s evisceration at the hands of Minnesota, and most recently, grabbing a program-record 12th win in front of more than 90,000 people at Nebraska.

And he’s doing it without making any systematic changes. Ferentz didn’t change his program’s identity to get to where he is now. This is still Iowa football — the difference is how it’s played. It’s played the right way. Ferentz realized the problem, and he fixed it.

On Saturday, he has a shot to do it again, to keep this dream of a season alive and make it even better than it has been. Michigan State is, and should be, favored in this game. The Spartans came out on top of the superior Big Ten East and deserve to be there just as much as the Hawkeyes.

If Iowa wins, Ferentz and Company will have accomplished the goal of capturing the Big Ten crown. The Hawks will head to the playoff and will be one of the four best teams in the country, just a year after no one would have blamed Gary Barta for showing the head coach the door.

If they lose, it will take the wind out of the sails of this whole run. It would be disappointing, yes, but would it take away from what the Hawkeyes accomplished? Absolutely not. And as long as the contest isn’t a blowout, a likely trip to Pasadena, California, to play in the Rose Bowl isn’t a bad consolation prize at all.

Judging strictly on the wins, this is the best football team in Iowa history. No one, except for Ferentz, his staff, and his players, thought that was possible 13 weeks ago, but here we are.

In the Year of Ferentz, his team has done everything it could have for a chance to be the Big Ten’s — and the nation’s — best squad.

Its potential three-game quest to prove that starts Saturday in Indianapolis. At this point, nothing Ferentz and Company do should surprise any of us, because there’s something about the way this team plays, and the way this year has gone, that’s special.

Will that continue Saturday?