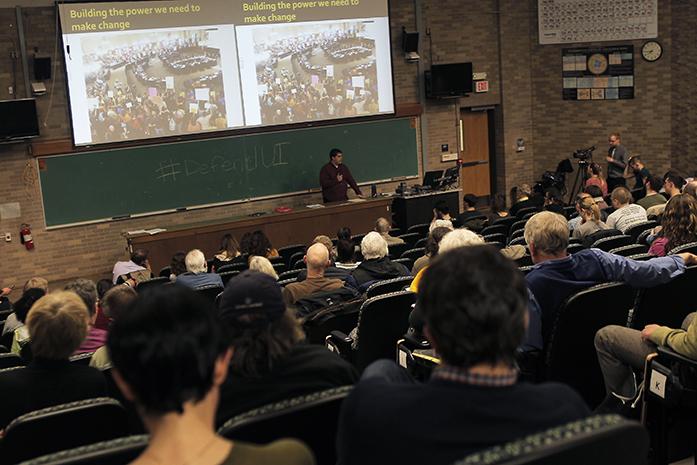 A Campus Community Assembly discussing Bruce Harreld is held in Van Allen Hall on Tuesday, Nov. 17, 2015. Students and faculty are concerned about the new presidential hire due to lack of experience. (The Daily Iowan/Courtney Hawkins)

Organizations unhappy with Bruce Harreld’s appointment as president of the University of Iowa may begin emulating protesters outside the state.

A forum held by Iowans Defending Our Universities hosted two guests from the University of Missouri who shared lessons and tips on how to enact change. The forum also delved into the circumstances surrounding Harreld and the state Board of Regents’ presidential-search process.

Among a list of Harreld’s perceived shortcomings, the group pointed out low faculty, student, and community support, apparent inaccuracies on his résumé, and his inexperience with issues that affect higher education institutions, such as sexual assault.

“He’s already here, and part of me, I think, has to accept that. I know he’s an illegitimate president, and I won’t forgive that,” Iowans Defending Our Universities organizer Brad Pector said.

Pector also said the organization has called for Harreld to have a public forum. However, Harreld has expressed a preference for one-on-one meetings.

Abby Thomas, another Iowans Defending Our Universities member, said the organization is attempting to establish another group targeting undergraduates who many perceive on being uninformed on the issue.

Guest speaker Samuel Cohen, an associate professor of English at the University of Missouri, emphasized the need for public universities and shared governance to be protected.

“Dissent is, and has to be seen, as an integral part of a public university,” he said. “It’s built into the system. Sometimes, people with business background find it hard to understand why academic departments have to vote on everything. It strikes them as messy and inefficient, and it is.”

Anger towards Loftin had been growing since the university decided it would stop paying graduate teaching and research assistants’ health insurance. Nine deans pushed for Loftin’s resignation.

In turn, graduate assistants joined forces with other students and held protests as two issues, health insurance and racism, brewed together.

Jim Haden, current member of the Coalition of Graduate Workers at the University of Missouri, also shared lessons learned at Mizzou.

Haden said being uncivil and showing a face that the university does not want to be seen is what must be done.

“Only by forcing the university to listen, and this an important lesson, can we get any changes enacted,” he said.

He also said that business mentalities should be separated from universities.

“Sometimes in academia we face problems that can’t be answered with one simple yes or no, or good or bad,” he said.